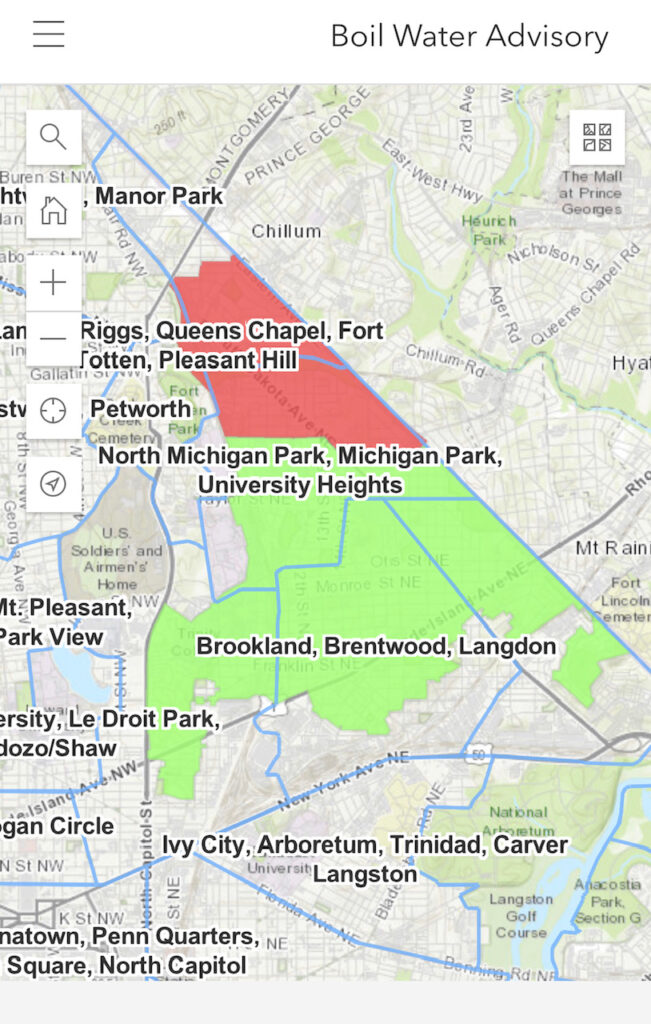 “Following two consecutive days of clear samples for most of the Advisory area, DC Water is lifting the Boil Water Advisory for a portion of the impacted area. DC Water has determined boundaries for a smaller impacted area which will remain under a Boil Water Advisory until two consecutive days of clear samples are obtained. Customers can view the interactive map or call the 24-Hour Command Center at (202) 612-3400 to verify if their residence falls within the area still affected. Customers located in the impacted area should continue boiling water for drinking and cooking until further notice.

Customers who are not located in this updated Advisory area can use tap water after running cold-water taps for 10 minutes before returning to normal water usage. Running the cold-water tap will replace water sitting in pipes during the advisory with fresh water from the water main.

It is anticipated sample results for the remaining impact area will be analyzed by Sunday morning, August 8.

Customers still affected by the boil water advisory should continue to follow these precautions:

Cooled, boiled water or bottled water should be used for:

*Do not use home filtering devices in place of boiled or bottled water.

Customers who are still impacted by the Boil Water Advisory may receive water at North Michigan Park Recreation Center, 1333 Emerson St., NE, Washington, DC, from the hours of 9:00 a.m. to 5:00 p.m. today.

Today, two consecutive days of samples taken throughout the Boil Water Advisory impact area confirmed there was no impact to water quality resulting from the pressure loss event on August 4th in most of the impacted area. However, an advisory remains in place for an isolated area where one sample was positive for Total Coliform on August 6. DC Water has taken an additional sample from the location, following localized flushing of the distribution system, and expects to have results by Sunday morning August 8.

DC Water has consulted closely with the Environmental Protection Agency (EPA) on the Advisory and action plan. DC Water will continue flushing water from the system, to bring fresh water into the area. The Authority will continue testing water samples to assess tap water safety. The safety and health of our customers are our top priorities, and the boil water advisory will remain in effect until we confirm that the tap water is safe.

DC Water issued the Boil Water Advisory after a temporary loss of pressure in a portion of the distribution system in the late afternoon of August 4, 2021. On Thursday, August 5, DC Water collected water samples at 10 locations in the impacted area. Those samples were tested overnight, and DC Water analyzed the results the morning of August 6. The nine samples that were negative for coliform bacteria yesterday were also negative today. The one sampling location that tested positive yesterday for coliform bacteria today tested negative. A second consecutive negative test is required before the advisory is lifted in the remaining impacted area. Coliforms are bacteria that are naturally present in the environment and are used as an indicator that other, potentially harmful, bacteria may be present.

Due to the loss of pressure in the system, it may have been possible for bacteria or other disease-causing organisms to enter the water through cracks, breaks or joints in the distribution system.

Bacteria and other disease-causing contamination such as viruses and parasites can cause symptoms such as diarrhea, cramps, nausea, headaches, or other symptoms. They may pose a special health risk for infants, young children, some of the elderly and people with severely compromised immune systems.

The symptoms above are not only caused by microbes in drinking water. If you experience any of these symptoms and they persist, you may want to seek medical advice. People at increased risk should seek advice about drinking water from their health care providers.

Please share this information with all other people who drink this water, especially those who may not have received this notice directly (for example, people in apartments, nursing homes, schools, and businesses). You can do this by posting this notice in a public place or distributing copies by hand or mail.