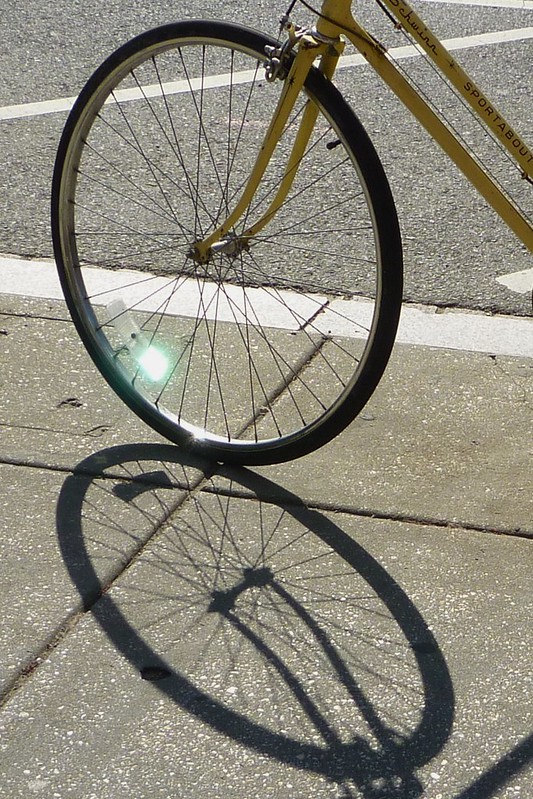 Had a really weird bike theft incident and was curious if anyone has experienced a similar situation before. Last Saturday night (5/1), I’d left my bike locked up for a few hours outside a friend’s place on H St. When I went to ride home, I noticed my front wheel had been detached but was at least still there. I assumed someone had tried to steal it but didn’t succeed, and I managed to get it back on and rode home without giving it much more thought. I haven’t ridden since last weekend, and it took me until this morning to realize that the front wheel on my bike is not actually my wheel.

In the dark and just wanting to get home last weekend, I hadn’t paid very close attention when reattaching what I thought was my wheel. My bike and wheels are REI’s co-op brand and have bigger tire treads for trail riding, but this very strange wheel thief left me instead with a wheel with a smooth road bike tire on it. Has anyone seen this before?

Was this just an opportunist fellow bike rider who wanted to trade up for a slightly better wheel, or someone who stole this wheel from someone else’s bike but then liked the one on my bike better? There doesn’t appear to be anything discernibly wrong with the wheel they left me, other than it looking slightly older and a little worn (also glad it works with my disc brakes, so, thanks?). I’m glad they didn’t leave me wheel-less, but I’m really confused about why someone would be out stealing bike wheels but also leaving replacement wheels behind that seem perfectly functional. Curious to know if anyone has seen anything similar before.”