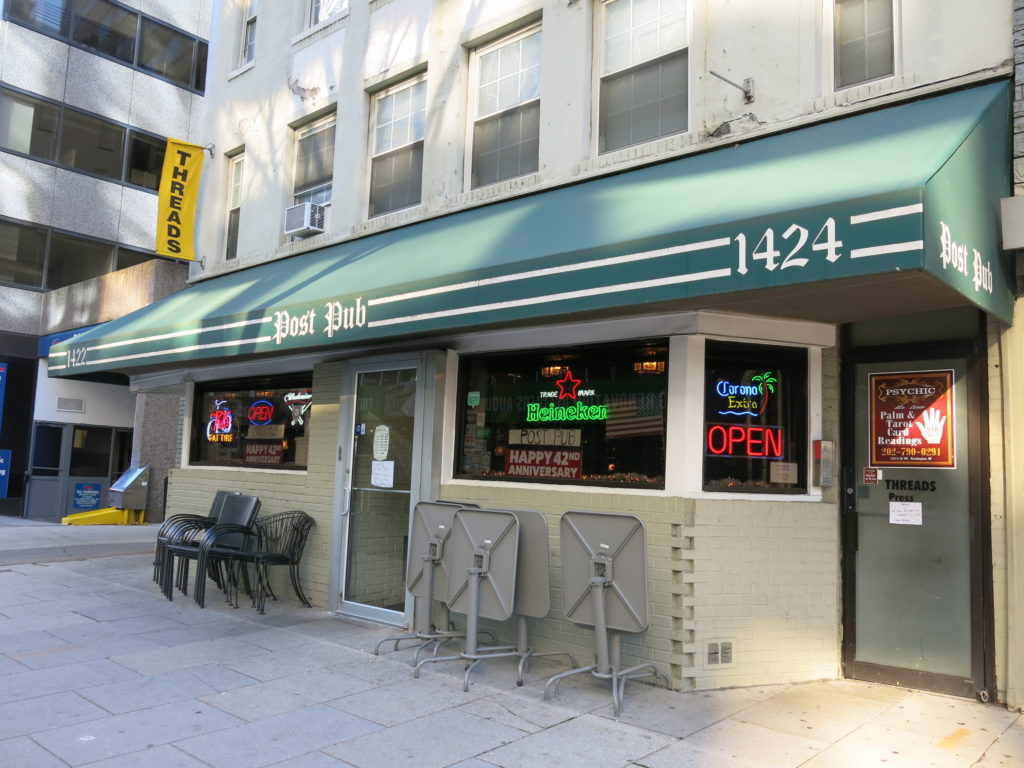 “Hold those Post Pub eulogies for now. I just spoke with owner Bob Beaulieu, who said closure is not “100 percent for sure, but it’s not looking good.” He still has meetings planned with the landlord and others. More as I know it.”

As you know, the COVID-related shutdown has been devastating to the hospitality industry, especially bars and restaurants. Mom and Pop businesses like the Post Pub are particularly hard hit. While a final decision about the future of the Post Pub has not yet been made, it does not look good. The economics of just outdoor seating or limited capacity don’t work when coupled with the high operations costs of a D.C. establishment.

For almost 44 years, the Pub has been honored to be a part of your day, evening, Happy Hour, or weekend. We’ve enjoyed being a place where people from every walk of life feel comfortable. We can’t thank you enough for your support over the years. As soon as a final decision has been made on the future of the Post Pub, we will update this page and the local media. Thank you again from the bottom of our hearts. #LongLivePostPub”

Thanks to Ben for sending:

“Getting the sad news from sources on staff that Post Pub will not be reopening. One of my favorite dives in DC along with several of my friends. Sad day and end of an era. Management told staff this morning apparently.”

I called the Pub and the phone just kept ringing without being picked up or going to voicemail. The Post Pub’s last Facebook post was March 16th and says: “Folks, the Post Pub has been in business for over 43 years. This shut down is tough. Please consider buying carry out food from us between 11am and 5pm beginning Tuesday 3/17.”

I asked Ben if they were still doing take out and he replied: “Don’t think they even did takeout. I called for takeout several times myself and they never answered”

“The building that houses the Post Pub was built in the late 1860s. At that time, it was a tailor shop owned by an influential German immigrant named Frederick W. Imhof. Mr. Imhof, who died in 1916, was also a prominent member of the Concordia Lutheran Church at 20th and G Streets, N.W.

During the Great Depression, the building at 1422 L Street sat vacant.

In 1934, however, a man named Richard Cornwell bought the facility and turned it into a cafeteria. If you use your imagination, you can picture people walking through what is now the back bar area, putting food on their trays and shuffling along. The area where we store our glassware was a pie shelf and under it is where meat was carved for customers. The Cornwell Cafeteria operated for about 25 years.

At that time, the pub was known as the Post House Restaurant, named for its close proximity to the Washington Post building. The Washington Post’s downtown building opened in the mid 1950s. Many Washington Post stories have been written in one of the booths or at the bar. The pub also was a popular watering hole for the Post’s printers, mailers, and union leaders.

The restaurant prospered for many years under the Post House name, but, in the early 1970s, Trailways Bus Company copyrighted the name “Post House” for the restaurants in their bus stations. Trailways contacted then-owner Boyce Wallace and made him a generous offer to change the name. Mr. Wallace accepted and in 1974 the Post House became the Post Pub.

In 1976, the Post Pub was purchased by current-owner, Bob Beaulieu, a native of Washington, D.C. Bob has run the Post Pub for over 40 years. Photos of family, friends, employees and customers adorn the walls of the Pub, capturing the essence of the place.

We have many people from all over the world who come to Washington D.C. once or twice a year who don’t feel their trip is complete without a visit to the Post Pub. A lot of them say that the Pub reminds them of a bar in their neighborhood. We here at the Post Pub pride ourselves in making customers feel comfortable right away. We thank you for your business and hope to see you again.”