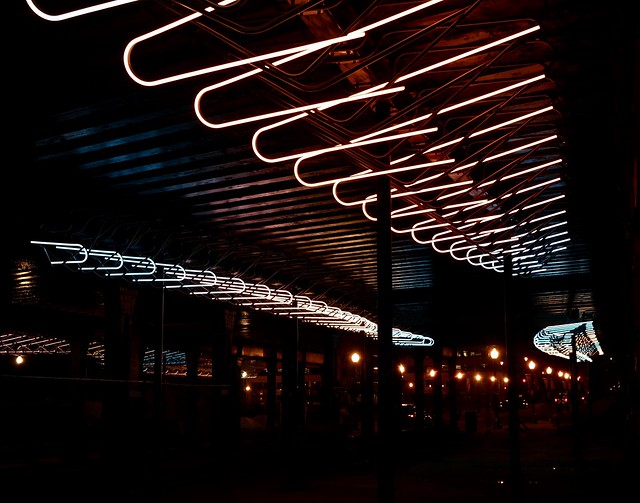 “On the evening of Tuesday, April 9, the NoMa Parks Foundation will turn on the power for Lightweave, a dynamic and compelling light installation in the L Street NE railway underpass. Comprising six spiraling lattices of stainless steel and bent LED tubing suspended above the underpass sidewalks — three above each passageway, hung from freestanding armatures — the artwork will light up the space 24 hours a day, with LED colors changing and moving in response to sound waves from the sidewalk spaces and vibrations from trains passing overhead. Lightweave is the second of the NoMa Parks Foundation’s planned underpass “art parks” to open and was designed by interdisciplinary San Francisco art and design firm FUTUREFORMS. The first art park — Rain, in the M Street NE underpass — opened in October 2018.

“The completion of Lightweave is one more step in the vital project to ensure that the east-west connections through NoMa’s underpasses welcome residents and visitors with a beautiful and unique experience,” says NoMa Parks Foundation President Robin-Eve Jasper. “The NoMa Parks Foundation and the NoMa BID believe that public art enriches the experience of everyone, every moment that they spend in NoMa. We have made a huge commitment to enlivening people’s lives and the neighborhood through public art, and people really appreciate it!”

In early 2014, the NoMa Parks Foundation announced an international design competition to transform the railway underpasses in NoMa. The initiative, part of the NoMa Business Improvement District’s 2012 Public Realm Design Plan and strongly supported by the community, is turning the underpasses at M, L, and K streets NE into sites of stunning contemporary light-art installations. The M Street underpass artwork, Rain, designed by Thurlow Small Architecture and NIO architecten, was opened in October. It has already garnered an award from the American Council of Engineering Companies of Metropolitan Washington, which recognized the contactor, M.C. Dean, and the project for demonstrating a high degree of achievement, value, and ingenuity. Installation work for Lightweave began a few weeks after the unveiling of Rain. Now that these two underpass projects are complete, the NoMa Parks Foundation has begun planning for the K Street underpass.

Located in San Francisco, FUTUREFORMS is an award-winning interdisciplinary studio employing a team of artists, designers, architects, technologists, lighting designers, and more. Since 2005, founders Jason Kelly Johnson and Nataly Gattegno have collaborated on a range of projects exploring the intersections of art, design, and technology with public space. Recent projects have included fine-art objects, furniture and lighting fixtures, art pavilions and sculptural shade canopies, and large-scale urban art installations. (Until early 2019, the studio was called Future Cities Lab.) Lead artist Johnson says of Lightweave, “It was exciting working with the NoMa Parks Foundation and the community to bring this concept to reality. The idea was to create something interactive, playful, and unique to the site. We were inspired by the idea of translating sounds from the site into sculptural forms.”

In addition to the underpass art parks, the NoMa Parks Foundation currently has another public park development in progress: “Alethia Tanner Park,” a 2.5-acre site along the Metropolitan Branch Trail above New York Avenue NE. Designed by landscape architecture firm Nelson Byrd Woltz, the park will include a large green space, a children’s playground, and a dog park; the project will also reconfigure the Metropolitan Branch Trail below R Street NE, converting the current Z-turn into a safer S-curve. “Tanner Park” is expected to open in early 2020.

In November 2018 the Foundation opened Swampoodle Park, an 8,000-square-foot children’s play space and dog park at the corner of 3rd and L streets NE. Designed by Lee and Associates, a D.C.-based landscape architecture firm, Swampoodle Park is owned by the District and the newest property in the Department of Parks and Recreation’s portfolio.” 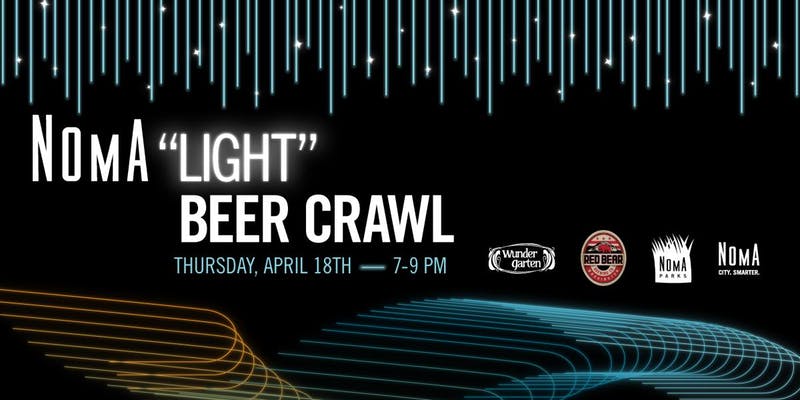 To celebrate the NoMa Parks Foundation’s underpass art parks, we’re partnering with our favorite neighborhood beer destinations for an evening of brews and LEDs. From 7:00 pm to 9:00 pm, we invite you to experience the beauty of Lightweave (L Street NE) and Rain (M Street NE) and then stroll over to Red Bear Brewing (corner of M and Delaware) or Wunder Garten (corner of L and First) to enjoy cold beverages, LED light dancers and great conversation. At 7, 8, and 9, on the hour, we’ll have staff stationed beneath both artworks to provide a brief overview of how these compelling installations came to be.”

more stories
Previous
Who Am I Kidding, I Can’t Resist