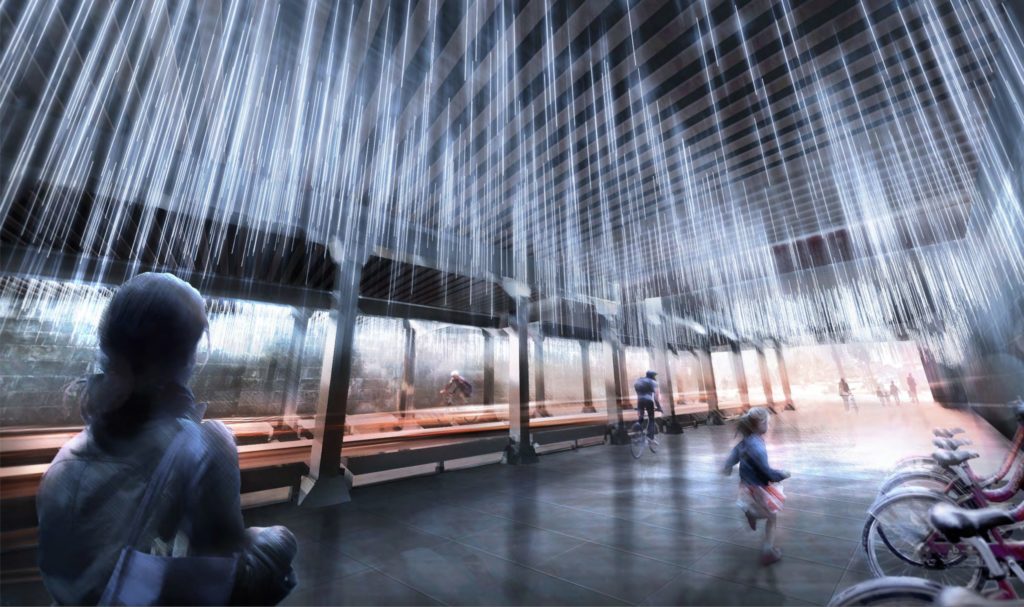 “Today the NoMa Parks Foundation officially opens the Rain light installation in the M Street NE underpass. The illumination event takes place this evening at the corner of M Street and Delaware Avenue NE at 6:30 p.m.”

“The NoMa Parks Foundation turned on the power today for Rain, a dynamic light installation in the M Street NE railway underpass. Comprising 4,000 LED-powered polycarbonate rods suspended above the underpass sidewalks, the artwork will illuminate the space 24 hours a day and pulse like gentle waves of rainfall in response to the flow of vehicular traffic beneath the elevated tracks. Rain is the first of the NoMa Parks Foundation’s four planned underpass “art parks” to open and was designed by Thurlow Small Architecture of Oakland, California, working in conjunction with Dutch firm NIO architecten in response to an international competition held by the Foundation.

“The railway tracks and underpasses in NoMa have been perceived as ‘dividers’ between the east and west sides of the neighborhood. However, with the explosive growth of the NoMa neighborhood, the underpasses have become critical connections for tens of thousands of neighborhood residents, employees, and visitors,” said Robin-Eve Jasper, president of the NoMa Parks Foundation. “From the outset, the goal of our art parks project has been to brighten NoMa’s east-west connections and make them appealing, even inspiring, places. With the Rain installation at M Street, the underpass will glow with ever-changing, soft white light, making an enormous, dramatic improvement in how pedestrians and cyclists experience the space.”

In early 2014, the NoMa Parks Foundation announced the international design competition to transform the four railway underpasses in NoMa. The initiative, part of the NoMa Business Improvement District’s 2012 Public Realm Design Plan and strongly supported by the community, will turn the underpasses at Florida Avenue and K, L, and M streets NE into stunning contemporary art installations. Although the winning designs for M and L streets were announced in the spring of 2015, delays in the permitting and permissions process meant they could not begin construction until this year.

Thurlow Small Architecture and NIO architecten have worked together over the past two decades on a number of infrastructure and public-realm projects. “Our tunnel proposal for NoMa does what all good urban parks do,” wrote the design team when Rain was first announced by the NoMa Parks Foundation. “It offers a moment of openness, a space to breathe, and a place where thoughts can drift away.”

In addition, the NoMa Parks Foundation also has two public park projects in progress: (1) Swampoodle Park, an 8,000-square-foot dog park and children’s play space at the corner of 3rd and L streets NE, which will open in November; and (2) “Tanner Park,” a 2.5-acre park along the Metropolitan Branch Trail above New York Avenue NE, which will begin construction by year’s end.

“It’s a very exciting time for public space in NoMa,” said Jasper. “From now through the next year-plus, residents, works, and visitors will get to see and begin to enjoy the fruits of years’ worth of intensive planning, numerous community meetings, and hard work by many people at the NoMa Parks Foundation, the NoMa BID, and our partners in the D.C. government and the larger NoMa community.”