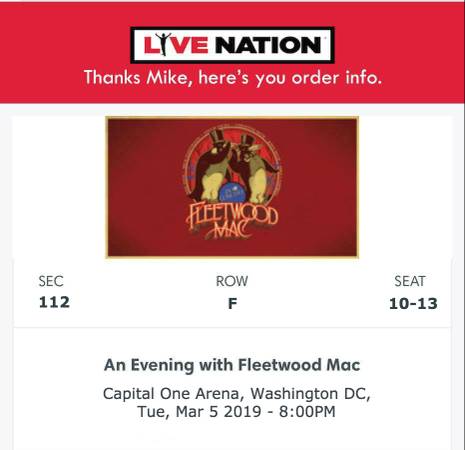 Just wanted to put a PSA out there so no one repeats my dumb mistake.

The TL;DR: never ever, ever ever use Zelle or Venmo to buy stuff off craigslist until you’ve got the thing in hand. They don’t have payment protection. Paypal does.

Anyway, I decided to try and get some last minute tickets to Fleetwood Mac tonight. Went on Craigslist to buy tickets. Messaged this legit-seeming post. The tickets in the post said “Mike” on them. The person texted like a Dad. It seemed legit until…they asked if I had Zelle. I thought it was weird. Their excuse was “Unfortunately they hold payments on new accounts for 21 days which is absurd.” Something about the word “absurd” seemed real to me. Almost disarming. You’re right! It is absurd. But they wouldn’t go along to get along: they refused to send the ticket before I sent payment despite my offer to send a drivers license picture. There were too many flags. I let the conversation end there.

Reader, I’d love to tell you that I, having learned my lesson and stopped right here.

I did not learn my lesson, nor did I stop right here.

I, an idiot, tried again with this post . Again, seemed legit. Lots of exclamation points. I texted the person: still lots of exclamation points. I also overuse exclamation points. I felt a connection. They said they were a teacher stuck at a parent-teacher conference in Baltimore and they needed to sell the ticket. I thanked them for their service. They thanked me for thanking them. That’s a very teacher-y thing to do. I asked about Paypal. They once again said Zelle only — same excuse as the last guy. (“I tried PayPal earlier and they want me to wait 21 days for funds since im new”). This made me nervous, so I explained that I’d rather use a service with buyer protection.

Scammer replied with: “I’m not dumb enough to use my bank account to try and pull a fast one. I value my freedom much higher than $125.”

They then sent screenshots of their order confirmation. 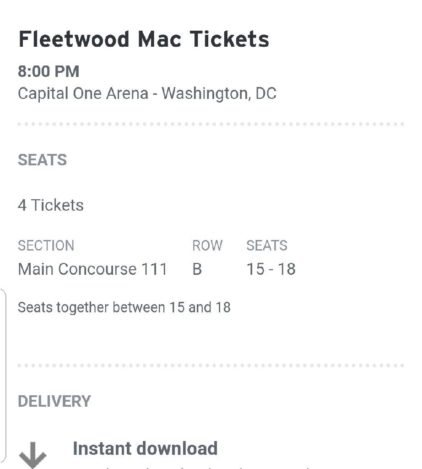 Also a fair point. They got me. Seemed too legit to be fake.

It was not too legit to be fake.

I sent money. They asked for confirmation of payment and then…promptly disappeared. The phone number was shut off.

Anyway. I consider myself a smart guy. I’m digitally literate. I stymied a scammer literally tonight. I got owned by a guy with a fake Gmail account and a burner phone. Learn from my stupidity. Only buy stuff off craigslist with Paypal. And if someone you’re talking to is resistant to Paypal, that’s a big! giant! flag!

Instead of being in Section 111 Row B at the Fleetwood Mac(ish) concert, here I am, in the stillness of remembering what I had, and what I lost. Which was $125.

Read more →
More Stories
Real Estate Fresh Finds: March 6“If anyone saw anything suspicious around that time in the neighborhood, we ask that you please contact MPD.”