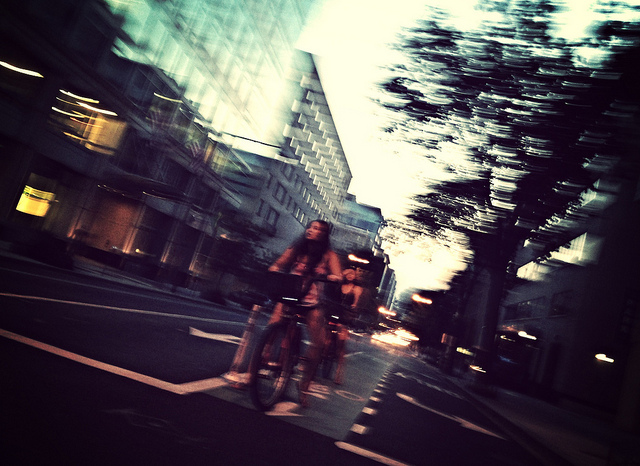 No one ever gets bored of hashing out the endless cyclists vs. drivers vs. pedestrians debate, but I wanted to quibble–nay, scream about a feature of cycling etiquette that I don’t see discussed much. I’ve been riding my bike regularly in the city for 5+ years now, whether it’s getting to work, running errands on weekends, shopping and bars, etc. I’m accustomed to using both bike lanes and street lanes in various parts of the city.

I’m female. Without fail, at least once per trip, I’ll be waiting at a red stoplight, when another (usually male) cyclist comes in behind me, sidles around me so they’re in front, then stops directly ahead of me, waiting for the light to change. It’s as if they’re assuming they will be fastest once the light turns, and that assumption grants the right to whiz past everyone else who’s waiting and position themselves at the front.

What kills me is that, at least when it comes to me, they’re usually wrong.

The bike I ride every day is designed to race, and while it’s not high-tier as far as racing bikes go, it’s far lighter than your average bike and faster than 9.5/10 of the bikes I see around on the city on my typical commute. Most of the time I end up passing these individuals within 4-6 seconds of the light turning green, without even pedaling too hard before reaching my comfortable gliding speed. Of course, that’s when I have room to pass safely. When I don’t, they win.

I talked to a friend about it, and he confessed to being an occasional culprit of this behavior, explaining that when the person in front isn’t dressed in cycling gear, he takes it as a sign they’re not going to be quick out of the gate. But because most trips that start/end in NW are 1-3 miles, I don’t wear any special clothing when riding around. IF you’re going to make guesses about another rider’s cycling capacity (and please don’t, see below), it’s better to do it based on their wheels, no?

I won’t rule out that at least in some cases, it’s sheer obliviousness that causes male and female cyclists to coast to the front of a line of riders waiting at a stoplight. And I’m really not trying to make this a gender thing, I’ve seen female riders do it too. But when it’s just me, or just me plus a line of mostly female cyclists, I have noticed a higher frequency of male cyclists bypassing us all to wait in front than female cyclists. I’ll caveat this by fully acknowledging my observational evidence is anecdotal and prone to selection bias.

My bottom line is that this behavior is just rude. Doesn’t matter if you’re male or female, on a fast bike or a slow bike, it seems inappropriate to maneuver to the front just because other riders are in the way. When you’re driving a car, you don’t bypass a line of waiting cars at a red light, even if you’re driving a BMW and you’re surrounded by Zipcars. My hope is that frequent and infrequent cyclists might read this, and give a moment’s thought to whether they engage in such behavior. Especially if they happen to be male cyclists who care about how their road etiquette comes off to female riders. But if that doesn’t apply to you, maybe you still care about being a considerate cog in the wheels that move thousands of people around the city every day (ha ha, get it?). And if you don’t care about that either, then never mind. Rant over.