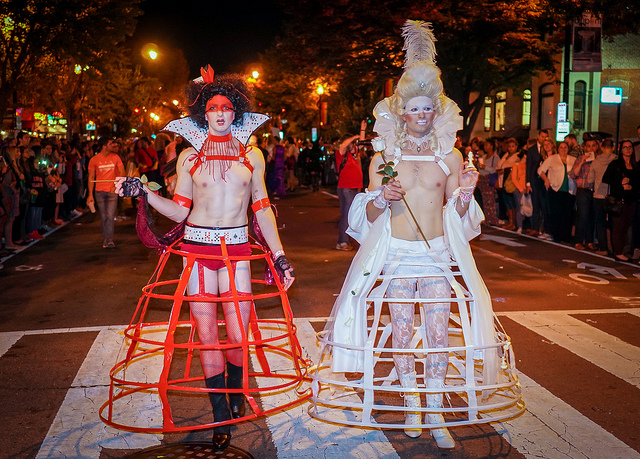 For those who go, be sure to send us your best shots for our compilation. On Instagram tag us #PoPville or tweet us @PoPville, upload to the PoPville Flickr pool or last but not least you can always email us at princeofpetw[email protected] Thanks and have fun!

“On Tuesday, October 30, at 7:00 p.m., Mayor Muriel Bowser will serve as the Grand Marshall at the 32nd Annual 17th Street High Heel Race. What began in 1986 as a much smaller event is now one of the District’s most unique and exciting neighborhood celebrations. Today, the High Heel Race draws thousands of residents and visitors to the Dupont Circle Neighborhood to cheer on hundreds of costumed drag queens and race participants as they race down the historic 17th Street, NW.

This year, the Bowser Administration, led by the Mayor’s Office of LGBTQ Affairs, collaborated with previous organizers, District agencies, and the LGBTQ community to coordinate and lead planning for the Annual 17th Street High Heel Race. Celebrations start at 5:00 p.m., the parade begins at 7:00 p.m., and the race, which generally lasts fewer than 10 minutes, begins at 9:00 p.m.”

“An epic DC tradition for more than 30 years, the 17th Street High Heel Race (Oct. 30, race at 9 p.m.) turns one Dupont Circle neighborhood street into a raucous, Halloween-flavored spectacle. Heel hobblers, most of whom are decked out in full drag and makeup, are cheered on by screaming fans for the full quarter-mile race. Photo ops, chuckles and plenty of fun are sure to ensue. Quick note: no chairs or animals allowed, as these intense competitors need as much space as possible to strut their stuff. Participants and spectators usually begin to gather around 6 p.m.”

“On Tuesday, October 30, 2018, the High Heel Race will take place in the District of Columbia. In conjunction with this event, there will be several street closures that motorists should take into consideration:

The following streets will be closed and posted as Emergency No Parking for the event from approximately 5:30 pm to 11:00 pm:
 17th Street, NW from R Street, NW to P Street, NW

The following streets will be closed for the event from approximately 6:30 pm to 11:00 pm: