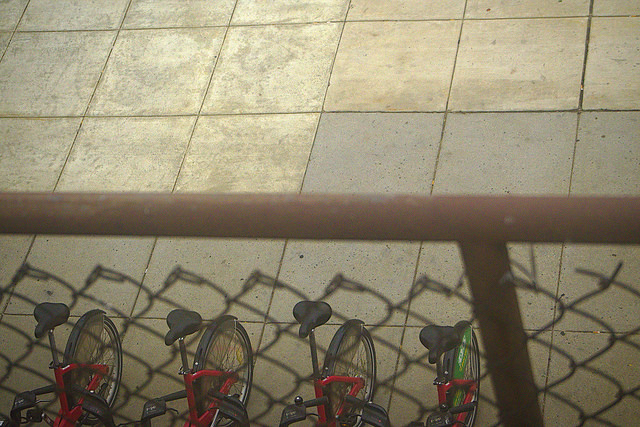 I live in the Shaw area near Giant, and last night awoke at 3am to some non-rat-related sounds in our back alley. I took a peek outside and three men in their twenties were riding down the alley on bikes and stopped under the lamppost about two doors down from my house. One man proceeded to start scratching/scrapping at the stem of the bike, as if he was trying to get something off. The other two men hung around and helped each other look over the fence of a backyard nearby. The man scrapping pulled something out or put something in a nearby trash can. Other than the scrapping, they were very very quiet and did not speak (I’m surprised I heard them in the first place). From the way they were acting, I suspected they had just stolen the bike but I did not see them commit any crime. The more I looked, the more the bike he was working on looked like my own (locked in my backyard), so I sprinted downstairs and opened my back door.

By the time I got to my door, I could hear them biking down the alley. Thankfully (for me) my bike was still locked up.

Since they had not committed any crime while I was watching, I did not want to call the cops but felt like I should do something. I’m a bike commuter and would feel absolutely awful and angry if someone stole my main transportation method and investment. I searched online for DC resources on the subject, came up empty, and decided to call the police tip line. This was now 15-20 minutes after the event, so the guys were likely nowhere close by. Nevertheless the tip line officer transferred me over to dispatch who took down my info. About 20 minutes later another officer called me, talked to me a bit more about the situation, the men’s descriptions, the photos I had taken, and said they would call if they needed more info.

As I was leaving my backyard this morning, an unlocked bike (but not one that I had seen the men riding) was sitting in the alley, 5-6 houses away from where I had seen the men standing last night. I spent 5 minutes waiting for someone to come by to retrieve it, but everyone seemed to be gone/the houses were dark. Since I was on my way to work, I decided to take the bike inside my yard to ask my neighbors in person later and/or possibly hand over to the cops. I stopped by the garbage can the man had reached into the night before, and the only item inside was a snipped cable combo lock.

So a two questions for the group, as I’ve wrestled with the appropriate response to this kind of situation:

I’m really just looking for some help on how to be a better neighbor and human being, so your help is greatly appreciated.”