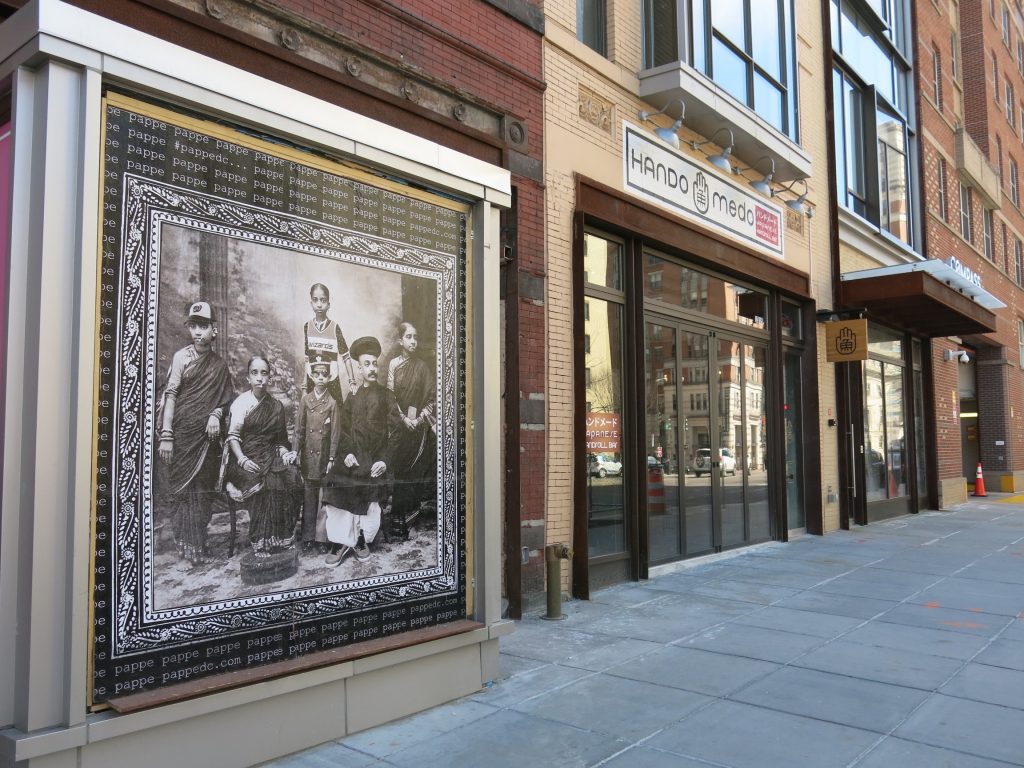 “Co-owners and close friends Vipul Kapila, Chef Sanjay Mandhaiya and Chef Shankar Puthran announce plans to open Pappe, an Indian neighborhood restaurant, in DC’s bustling 14th Street neighborhood. Pappe, which means ‘brother’ in Punjabi, is an affectionate term the three friends use to refer to one another. The trio bonded over Vindaloo at Chef Mandhaiya’s Northern Virginia restaurant Saffron and wanted to bring an authentic Indian restaurant within a refined yet playful setting to Washington. Pappe, located at 1317 14th Street, NW, will open later this spring.

The restaurant was designed by a close friend of the partners, Melissa Funkey, who was inspired by several visits to New Delhi’s vibrant fabric markets. The menu will offer bold and complex flavors of Northern Indian cuisine with some Southern Indian seafood dishes. Executive Chef Sanjay Mandhaiya has been in the restaurant industry for more than 15 years, and recently staged at two of India’s most highly lauded kitchens – Moti Mahal, where the dish butter chicken was first invented, and Kwality, which is best known for its Pindi Chana (chickpeas) and Taar Gosht – all three dishes will be on the Pappe menu. The kitchen will utilize fresh, whole spices, which will be toasted, and ground in-house, and each dish will be comprised of fresh ingredients delivered daily to the restaurant.

The three friends and future business partners brainstormed at Shankar and Sanjay’s Falls Church restaurant, Saffron, where Vipul, who owns an IT consulting company, found the authentic and fiery version of Vindaloo he had been seeking in the area. With Shankar and Sanjay’s extensive experience in operating Indian restaurants in Northern Virginia, along with Vipul’s business acumen, the trio set out to find the right space to bring their fresh take on traditional Indian fare in a more sophisticated and design-driven space. They found the ideal spot a year ago, just north of Thomas Circle, and began building out a custom kitchen with Melissa Funkey while searching for the perfect antique accessories at ancient markets in Old and New Delhi.

The menu, mostly Northern Indian in flavor, will include traditional dishes such as Chicken Tikka Masala, which will be grilled fresh and made to order, as well as more regionally specific dishes like Junglee Laal Maas–bone in goat with garlic tomato chutney and red curry; and of course, Vindaloo, which will be spicy in the manner that the owners are accustomed. A cocktail menu inspired by Indian flavors and non-alcoholic beverages, like fresh lime soda with Himalayan salt and mango lassis, will round out the beverage offerings. Final food and beverage menus, along with operating hours, reservation details, and other information will be made available closer to opening.”