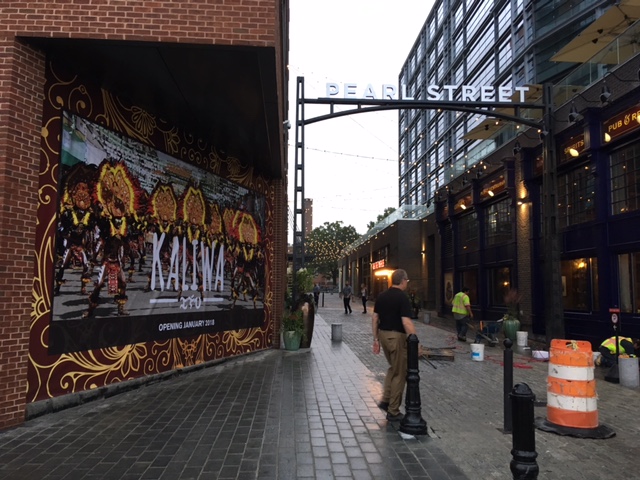 Update: You can read a story in Washingtonian with the restaurant’s side of the story including:

Armstrong says the manager handled the situation with professionalism as she was trained. He says when she asked the friends to leave, they said, ‘We’re not leaving, you’ll have to drag us out of here.'”

“We had no choice but to call the police,” says Armstrong. Since opening Restaurant Eve in Alexandria 15 years ago, he says it’s the first time the authorities have gotten involved with a customer.

It was 80 degrees in DC so it was only right to grab dinner and drinks with a friends. My girlfriend just moved to Southwest so it was a great chance to check out her new digs and then head out for bites and libations. As we were cruising the new Wharf boardwalk, she mentioned that there’s a new Thai restaurant. Since I just returned from Thailand, I said yes let’s continue the celebration.

We walked through the busy doors of Kaliwa, a Filipino, Korean and Thai fusion restaurant and found a seat at the bar. We sat down to one drink menu and one food menu slapped on the counter. After sitting there for 15 minutes, I asked the bartender if we could order food. He took our order that included a noodle dish and their signature whole fried fish. Once our food arrived, we noticed that the noodle dish was more of a soup and we were expecting a food item similar to pad thai or lo mein.

My friend asked one of the employees, who turned out to be the manager if we were able to get additional noodles but she stated that we would be charged the same price as the meal since the noodles are handmade. I told her nevermind and we continued to chow down while catching up on our recent trips aboard. As we continued our conversation, this woman “manager” offered an additional pour of wine for the lack of noodles in the dish. Such a nice gesture so we thought.

As we continued to indulge, I noticed that my friend staring at our shared meal while pulling out a long strand of black hair from the fish entree that we were eating. In our disgusts, We called over one of the servers to show him. He took the plate to show the woman manager. After a few minutes of reviewing the hair, she came over to address our issue. We were not trying to make a big deal of the situation and was just expecting a simple apology but before the expected “I am sorry but…,” she looked at my friend and say “this looks like your hair.”

My friend has blonde hair….hmmm. Once we shared that highly visible trait about the color of her hair, the so-called manager asked us how she should handle this. I don’t believe it was an unreasonable suggestion but I asked her to take the entree off the bill. She walked away annoyed and another manager, who seemed very nervous apologized profusely although he seemed like he had no say in the situation.

He offered us wine and dessert on the house but we told him because the manager accused my friend of placing the hair in the meal, we didn’t feel comfortable with the situation and just wanted the portion of the check that was free of hair to pay. The woman manager returned with an annoyed, defensive, lack of customer service attitude and berated us with why she needed to ask us if that was our hair. She questioned our professionalism by asking what industry we were in. But once I shared with her that I worked in the hospitality industry for nearly seven years, she shifted her accusatory ways. She continued on by saying that she topped our glass off and what more did we want – maybe an apology and being accountable for her lack of human touch and decency. As I tried to explain our reasoning and discomfort with her ways, she said I was being hostile and told us to leave the restaurant. I told her I was appalled and not ready to leave so she ran off while saying that she was calling the police. I told her to do it. Meanwhile, Chef Cathal Armstrong was so busy in the kitchen and saw everything unfold. He did nothing and continued to manage the kitchen while glancing at us and the situation. A total disrespect. As the manager was explaining her side of the story to him, he nodded a couple of times and she disappeared to what I believe was her coward moment of calling the police on two friends that were just catching up after a month of not seeing one another.

So for 20 minutes, my friend and I sat there anxiously waiting to be handcuffed by cops. Luckily, the police officers were so pleasant and provided some direction in handling this situation. We walked out of that restaurant with dignity and on our own terms.

I am not a person who likes to make a scene but I will defend myself if I know I am in the right or if I feel like I am being discriminated against.

As for that young “so-called” general manager, I can only make assumptions about her background, where she is from originally, and if she has any experience in life. But what I do know, is that she needs to take a course in customer service, implicit biases, and crisis management.

She was a horrible human being that night.”

Read more →
More Stories
“Given recent developments, this seems really out of touch and, well, made me want to break up with opentable.”Today’s Rental is “A two-bedroom and two-and-a-half-bathroom townhouse unit near Logan and Dupont Circle”