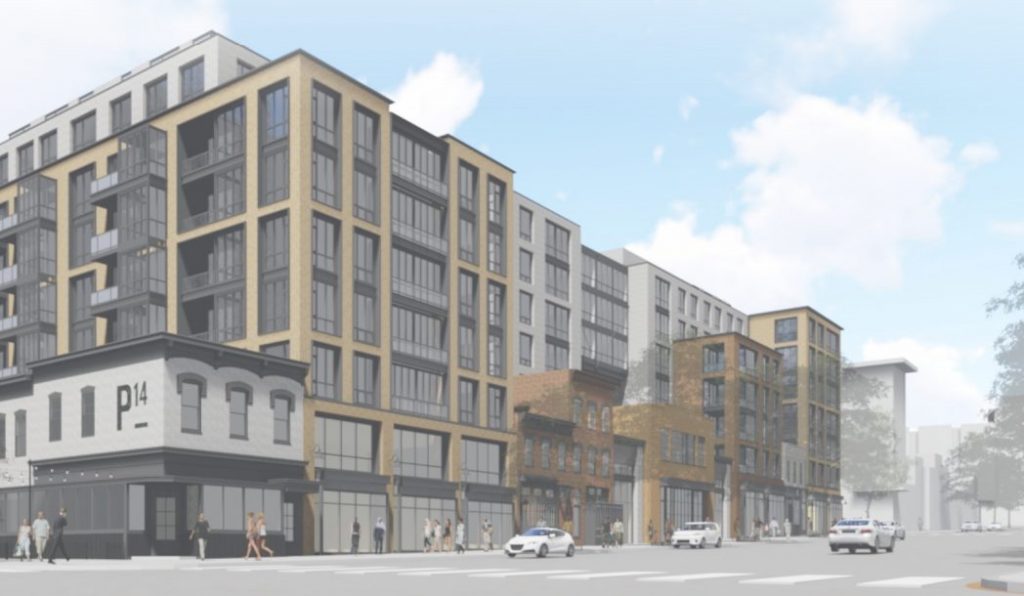 photos from the files of DC’s Office of Zoning

The historical preservation and zoning relief necessary to build an eight-story, 242-unit apartment building at 2122 14th Street NW (between V and W Streets) received endorsement from a committee of Advisory Neighborhood Commission (ANC) 1B/U Street on February 20. ANC1B’s Zoning, Preservation and Development Committee heard a presentation of a revised design by the developers of the long-time site of Martha’s Table, and then heard objections from members of the community. 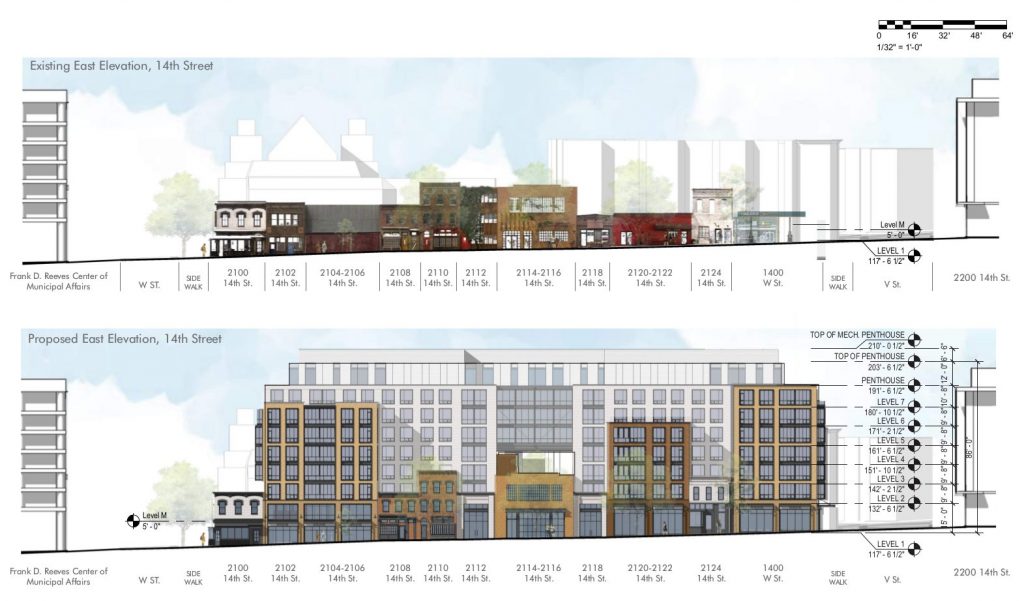 Attorney Meridith H. Moldenhauer of law firm Cozen O’Connor led the team presenting the project. It was the second time in two months that the project was presented to the committee, as criticism at the previous meeting had caused the development team to scale back the “ask” for the project. Still, the scaled-back project was not scaled-back enough for some neighbors, who requested further reductions.

As currently configured, the mixed use development will have retail space on 14th Street and 242 rental units (that is, not condos). The developers will comply with DC regulations on affordable housing, meaning in this case, that 10% of the gross floor area will be devoted to units for households earning equal to or less than 60% of Area Median Income. This required floor space was not translated into a promised number of units at the meeting. There will be 80 parking spaces for cars, above the requirement of 62, which would have an entrance on W Street. There will be 80 spaces for bicycles as well, which is a requirement, the presenters said.

The building is located in the U Street Historic District, so it is also necessary for the developers to go before DC’s Historic Preservation Review Board, which will give special attention to the building’s appearance.

Both the developers and their opponents claimed community support. The presenters said that had had meetings with local residents at a church and had taken other outreach measures. They had submitted 24 letters of support from neighbors to the DC government. Many of these are signed form letters. On the other hand, a representative of the Union Row condominiums, across 14 th Street, said she had submitted a letter from 92 Union Row residents in opposition to the project, and wish to see the building one story shorter. A look at the letter in DC government files shows that, of the 92 signatures, one signer has apparently crossed off his or her name and 19 more are signed by a single person “on behalf of these Union Row owners”.

After more than ninety minutes in a crowded and poorly-ventilated room, the committee formulated a resolution where it would recommend that the full ANC endorse the developers’ proposal but also transmit, as part of its endorsement, a list of community concerns that DC’s zoning and historic preservation authorities should “discuss”. (There was some back-and- forth about whether “discuss” or “address” was a better word in this context.) The neighbor’s objections would be included in the list of community concerns, the committee promised.

Separate motions for the zoning and historical preservations aspects of the project were both
passed by the committee.

This matter will likely appear on the agenda of the next meeting of the full ANC, which will
take place on Thursday, March 1, at the DC Housing Finance Agency (815 Florida Avenue
NW).

Next
Today’s Rental is a “Charming 1BR, 1 bath Apt Available in Petworth”