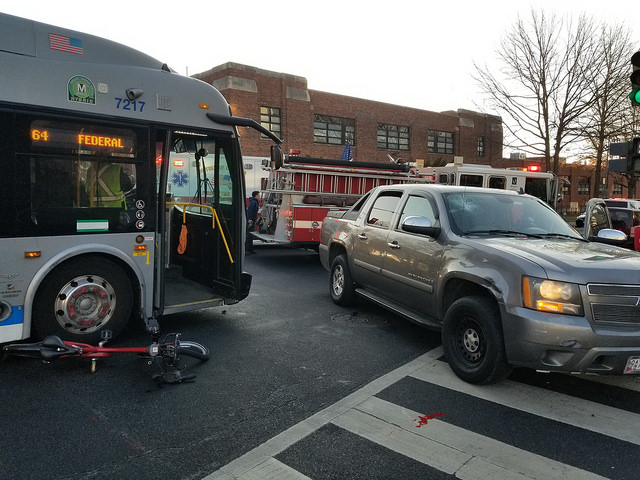 Thanks to all who messaged. One reader reports:

“As I was going to work I saw an accident here that involved a bus, a car, and a bike. It appears that a car heading north on 11th was trying to make a left turn onto Florida in front of a bus. A biker heading down the hill in the bike lane was moving faster than the bus and was hidden to the driver of the car. As a result, the biker collided with the car who couldn’t see it coming because of the bus.

The issue of bikes and buses on 11th St has been previously raised on PoPville noting the dangers to bikers of having to navigate bus traffic on 11th.

Because of the city’s decision not to move the 64 to Sherman, this accident was just waiting to happen. 11th St has a dedicated bike lane and the second busiest bike corridor in the city. The 63 already runs down Sherman and has dedicated bus stops. Buses on Sherman are less likely to run late than those going down 11th St according to a DDOT’s own data The Mayor’s office has sought to promote both biking and public transportation. DDOT needs to recognize that having buses and dedicated bike lanes on the same street poses a significant danger to the safety of the District’s residents, not to mention that in this case it is also less efficient for those riding public transportation. It’s time the city move the 64 to Sherman to consolidate the lines, to prevent buses from crossing into or blocking bike lanes, and to speed up the commute for those riding the bus.”

Hope all are OK, updates when/if more is known.

more stories
Previous
Random Reader Rant and/or Revel
Next
“the suspect apologized for shooting at the victims over mistaken identity” Suspect Arrested.