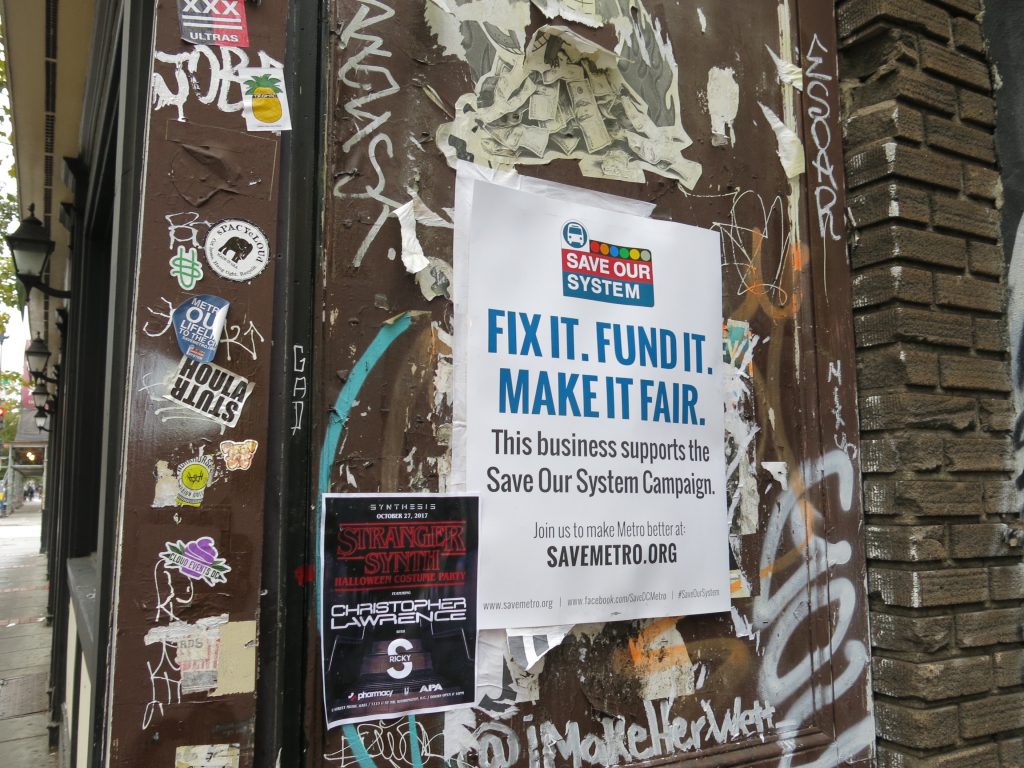 ‘It’s a sad day for transit riders when ‘we won’t proactively hurt you this year’ is considered a good headline for WMATA. Yet, that’s the spin dominating today’s brutal budget news. The fact is that the GM’s FY2019 budget proposal fails to address the most recent service cuts, fare hikes, inadequate safety measures, and daily disruptions that deny riders the safe, reliable, and affordable service they need to survive. It fails to offer those with transit choices any incentive to start riding again.

It appears CEO/GM Wiedefeld keeps falling for the oldest trick in Washington. It’s the one where politicians say they’ll fund your program if only you’d spend more responsibly. So you cut costs, as Wiedefeld tried to in FY2018, only to find those same politicians have a whole new set of conditions for that same old funding.

The truth is that programs that are broadly popular and provide critical services to people who need them are the programs that people will show up to fight for; programs that Save Our System in coalition with 11,000 riders, 35 small businesses, and dozens of community organizations backed this year. While WMATA heard our cries about cuts and hikes, they ignored our call to reverse them. That’s unfortunate, because a visionary budget – one that proposed a fixed and fair system –  is one that we are confident Washingtonians, Marylanders, and Virginians could more easily be rallied behind. While we are disappointed, we are not done. There is still time for WMATA to improve this budget, and plenty of people in the Jackson Graham building who we believe want to see it improved.

A Note on Bus Reorganization

We are open-minded about the proposed bus study, but we caution WMATA to learn from the mistakes made by Wiedefeld’s successors at the Maryland MTA. Their BaltimoreLink has proven to be an underfunded, confusing, and ultimately ineffective bus reorganization. Additionally we are concerned that the current proposed bus line changes would further under-serve neighborhoods already living with lack of access to food and other crucial resources while increasing service to already well transit served developments and neighborhoods like The Wharf and NOMA.  If they are interested, we are ready and willing to work with the agency to ensure they hear from a true cross-section of Metrobus riders, including those whose routes may be low frequency but are also the only accessible lifeline they have to the city.

On Deck: Fight for Funding

Whether we get a budget that actually helps riders or one that merely stops hurting them, the agency will still be confronted with the same fundamental problem: long term operating and capital funding. Instead of forcing the agency to ask for annual subsidies every budget cycle, regional leadership must take action now to create dedicated, sustainable funding. Since they cannot agree as a region on a single dedicated source, we encourage them each to identify and legislatively commit to the mechanism that works best in their jurisdiction. As budget season heats up, and long after it has passed, we will be mobilizing riders to make sure that Mayor Muriel Bowser, Governor Larry Hogan, and whoever wins in Virginia next Tuesday, stop play-acting and start governing.

In the weeks ahead, SOS will compile perspectives from riders and our coalition partners to better inform the the Mayor and Governors of the impacts that this budget and their failure to fund the system will have on their people.”