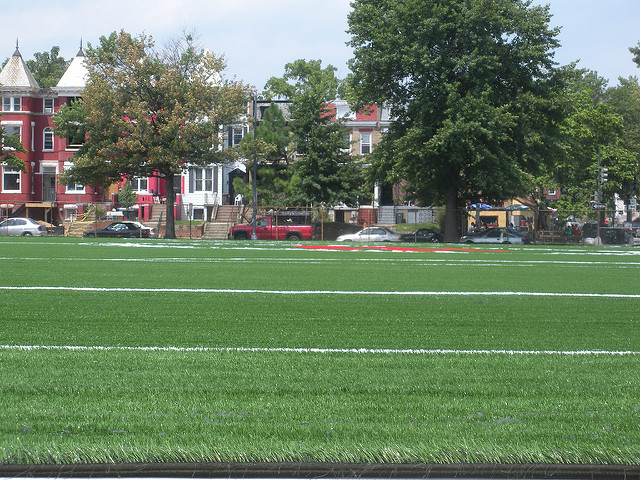 Ed. Note: This is not the first time the police have become involved.

I am writing to inform and update you about an issue that occurred in Columbia Heights this past week – and ask for your support.

As many of you know, Latino and black residents of the community play soccer everyday after school or work at the field of Harriet Tubman Elementary School on 11th between Irving and Kenyon. Many of the residents have been playing there for 20+ years. Their kids come out of school and play on the playground at the field while their parents or siblings play soccer. My husband is one of the people who plays there.

This past Wednesday a pay-to-play sports league (Zog Sports) showed up and kicked them off because they paid $4000 for a permit to reserve the field Monday, Wednesday and Thursday for the next two months (the entire summer break). On Tuesdays there is already a Bocce league.

The community members bought the soccer goal nets and when they learned they would not be able to use their field until September went to remove the nets. DC Parks and Rec and the police we’re called and one guy was given a fine and 5 year ban from all DC Parks and Rec spaces – even though he had the receipt for the nets. The community was then told that if they play more than a 3-on-3 pick up game, they have to buy a permit to play on the field they have been playing on for over a decade. Mind you, this private league charges $90 a player in order to afford the permit and DC Parks and Rec is now asking community members who already pay for the field through our taxes to pay to play there even though they are not an organized league.

The Zog Sports league says their goal is to build community, however I told the representative “respectfully, you are building community amongst the elite of DC who can afford to play soccer at the expense of displacing long time residents of color.” Ultimately, I do not think it is the league’s fault as they did not know the field is in daily use, it is the city/school’s responsibility as they allowed it to be permitted in the first place.

We took this issue of gentrification and the privatization of a public space to the Advisory Neighborhood Commission (ANC) that same evening and met with the Commissioner, Ward 1 rep to the Mayor and have since contacted the Director of the Office of Latino Affairs. They will be coming back to the field this Wednesday at 7:30pm to meet with the community. We plan to hand them a petition at that time with the signatures of concerned residents requesting that the public field not be privatized since it is in daily use by the community. Please sign the petition at this link, bring hard copies of the attached petition to the meeting or send a scanned version back to me in advance.

We would appreciate your support in signing the petition, circulating it to your neighbors, colleagues and friends, and if you are available invite you to come to the meeting Wednesday evening to show support for the community affected.

A similar situation happened in San Francisco two years ago, which you can read about here as it made national news. Unfortunately, this is not new and is likely not the last time something like this will happen in our community, but we have the power and voice to do something about it and to support those most affected.”

Read more →
More Stories
Your Afternoon Animal Fix“Gone, but not forgotten. Maybe the next version will be waterproof.”