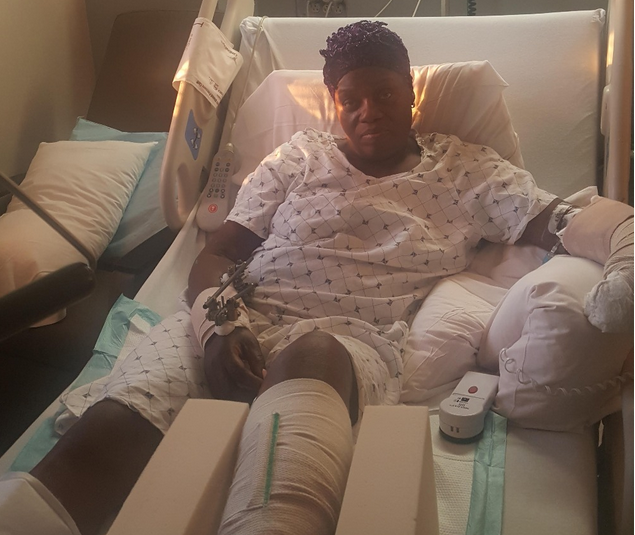 Thanks to a reader for passing on this fundraising page for Pinkie’s Medical Expenses:

“On January 25, 2017 the 60 year old owner of Jam Doung Style Jamaican Cuisine Restaurant was shot four times after closing up for the night.

After a very long day of work—7am to 9:30pm— Jam Doung’s owner, affectionately known as Pinkie by family and friends, and two of her employees began walking to their cars, making jokes and laughing, which is common for the group. They then noticed a masked man approaching them. The masked man focused all of his attention on Pinkie, pointing the gun in her face and commanding her to give him her purse.

What happened next did not shock anyone other than the gunman and his accomplice that was standing as look out. Pinkie freed her hands of the food she was carrying home, and then grabbed the muzzle of the gun that was being pointed at her. Pinkie and the gunman struggled with the gun for what seemed like forever. Then the gunman shot Pinkie in her right wrist. But Pinkie continued to fight until she was able to pull the mask off of her attacker. Pinkie was, however, shocked to realize that her attacker was someone that she knew.

It stunned Pinkie when she saw that her attacker was a regular customer of Jam Doung that she took a personal interest in. He is a 26 year old young man that she fed when he couldn’t afford his food and who she gave money when he was in need. And when he came to her frustrated after discovering that he had a daughter he’d just found out about, Pinkie counseled him and offered him a job. But he didn’t show up for work.

Pinkie’s attacker then shot her in the left leg breaking her tibia and severing an artery. Once Pinkie fell to the ground, her attacker approached her grabbing her purse from her hands. But, before running off with Pinkie’s purse, her attacker decided to shoot her a final time in her left arm severing many of the tendons in her forearm.

As Pinkie lay bleeding, she says she did not think she was going to make it. So she looked to heaven and prayed to God for help. And in that moment Pinkie says she could see that the blood pouring from the bullet hole in her arms began to coagulate. And when she finally woke up in the hospital, she knew that it was by the grace of God.

When asked why she fought so hard, Pinkie said, “You never know what is going to happen when someone pulls a gun on you. I could have given him my purse and then he could have shot me in my belly. Or he could have shot [one of my employees]. So I wanted to keep him close.” Pinkie then said, “Besides, if you knew the relationship between a woman and her purse, you’d know that isn’t a question you need to ask.”

Pinkie’s family is so grateful to still have her in their lives. They feel the blessing, for they know that things could have been so much worse. Pinkie and her family would also like to thank the out pouring of love and support they have received since the attack took place. And for your support and prayers we thank you. And to all of those who have shown an interest in making a monetary contribution, we have created this page.

All donations will go directly to Pinkie and will be used to help with her surgery, hospital, and rehab expenses. And for all of the expenses we do not yet foresee. And again, thank you for your concern and support. We really appreciate it.”

More Stories
Telling Visualization of How Folks Feel about the Travel/Immigration Ban at the Newseum“The Takoma Theatre will have few equals in the city once our renovation is completed.”