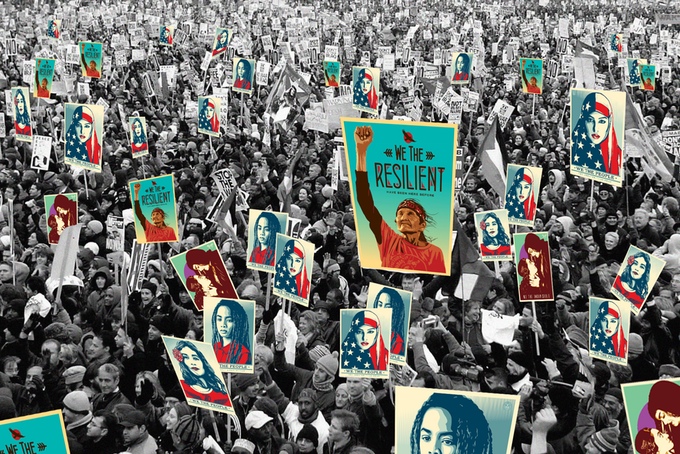 From the Kickstarter fundraiser:

“WE BELIEVE ART HAS THE POWER TO WAKE PEOPLE UP.

Eight years ago, the artist Shepard Fairey made the iconic image that captured a period of HOPE in America. Today we are in a very different moment, one that requires new images that reject the hate, fear, and open racism that were normalized during the 2016 presidential campaign. So on Inauguration Day, We the People will flood Washington, DC with NEW symbols of hope.”

“This art has been already been commissioned by the Amplifier Foundation. Some of the greatest activist artists working today, including Shepard, Ernesto Yerena, and Jessica Sabogal, have collaborated with photographers to create a series of images that capture the shared humanity of our diverse America.”

“Now the tricky part: printing and distributing these images on a massive scale in time for Inauguration.

Much of Washington will be locked down on Inauguration Day, and in some areas there will be severe restrictions on signs and banners. But we’ve figured out a hack. It’s called the newspaper! On January 20th, if this campaign succeeds, we’re going to take out full-page ads in the Washington Post with these images, so that people across the capitol and across the country will be able to carry them into the streets, hang them in windows, or paste them on walls.

Every dollar you put into this campaign will buy six ads printed and distributed for us.

Amplifier will also distribute these images as large placards throughout DC at Metro stops, out the back of moving vans, at drop spots to be announced in the coming week via our social media feeds, and, on January 19, as free downloads for you to print and share as you like. 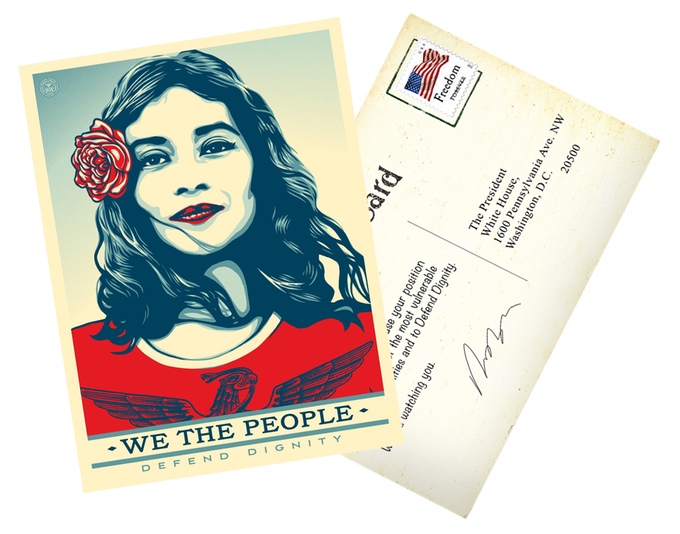 And for every donation over $5 we will even send a postcard of the art of your choosing to the incoming President after he takes office! (Stay tuned for the text we will use!)

This art is meant to spark a conversation, and after January 20, our work will continue. What does WE THE PEOPLE—these three famous words in the preamble to the Constitution—mean in the 21st century? Over the next several months, Amplifier will partner with organizations, schools, and everyday families to create spaces across the county, in both red states and blue, where we can speak, listen, and share our answers. Watch for updates on this as the campaign funds and moves into the world!”

Read more →
More Stories
Famous Luigi’s Pizza was there 70 Years, Bonfire made it 8 monthsPhotos from PoPville – Biking and Bourbon