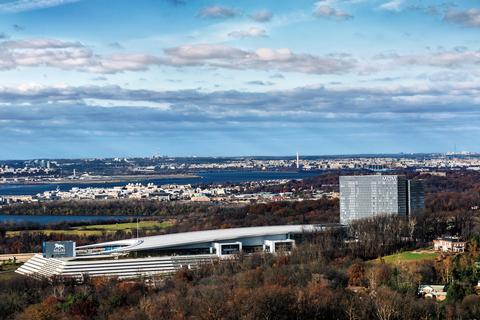 “One of the most versatile talents in entertainment, two-time Emmy Award-winning comedian SARAH SILVERMAN will take the stage at The Theater at MGM National Harbor for a comedic performance April 22 at 8 p.m.

On and off stage, Silverman continues to assert herself as a force in standup comedy. Set for release later this year, Silverman will show off her acting chops in both The Book of Henry and The Top Secret Untitled Lonely Island Movie.

The Theater at MGM National Harbor offers an experience unlike any other in the region, providing fans the opportunity to see world-class entertainment in an intimate setting. The recently opened Theater features seven VIP suites and flexible seating designs, accommodating 3,000 guests for reserved-seating events and a little more than 4,000 for general admission shows.

Silverman’s comedy career launched when she joined Saturday Night Live in 1993 as a writer and feature performer. She’s made memorable guest appearances on notable television shows including Monk, which earned her a 2008 Primetime Emmy Award nomination for “Outstanding Guest Actress in a Comedy Series.” She also appeared in The Good Wife, The Larry Sanders Show, Mr. Show with Bob and David and Seinfeld.

In 2009, Silverman was nominated for a Primetime Emmy Award for “Outstanding Lead Actress in a Comedy Series,” where she fictionalized versions of herself in the Comedy Central series The Sarah Silverman Program. Shortly after, “The Bedwetter: Stories of Courage, Redemption and Pee,” Silverman’s memoir, earned the 2010 New York Times Bestseller distinction.

Silverman continues to lend her voice to the Emmy-nominated, FOX animated series Bob’s Burgers and most recently has been seen as the star of I Smile Back, the film adaptation of the Amy Koppelman novel. Her additional film credits include School of Rock, There’s Something About Mary and the Oscar-nominated smash hit Wreck-It Ralph.”