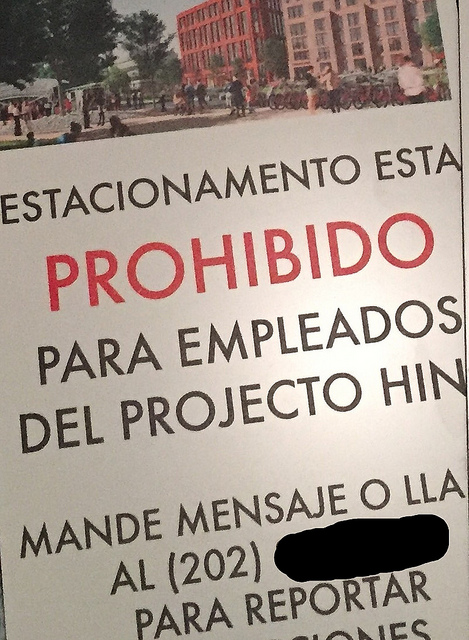 There has been a lot of talk about signs this week, so I thought I would flag what I believe to be an unfortunate set of signs that have been appearing around the Eastern Market construction. Photo above. Some neighbors have taken it upon themselves to create metal no parking signs in an attempt to scare workers from using street parking. Segments of my note to Charles Allen are below, including more detail. To Councilmember Allen’s credit, he reached out and asked that I connect with him on this, and I’m hopeful he will agree that this type of coordinated messaging has no place on our public streets and needs to stop.

The irony is that many of these signs are being strapped to street sign posts within line of sight of MLK quote signs that have been appearing in front yards throughout the neighborhood this week.

And an update since last week: while I appreciated Councilmember Allen’s initial response (publicly on twitter, of course) my attempts to connect with him privately have been met with radio silence.”

“As background, these non-governmental metal signs have appeared in a several block radius around the Hine project, apparently placed by residents who believe they are authorized to credential and otherwise limit access to public street parking spaces. It is clearly a coordinated effort among a group of Hill residents, as the signs are identical and widespread.

[N]either I nor anyone else on Capitol Hill has a legitimate claim to a public parking space, so it is important to acknowledge that these signs are not an attempt to address a legitimate parking issue. In fact, if these signs are to have any impact on parking, it is to simply push workers to park further away from the job site – still on the Hill of course – meaning these residents are alleviating their personal concerns not only at the expense of these workers, but also at the expense of their neighbors on the Hill. It is the epitome of selfishness and entitlement at best. ….

The real problem with these signs, if we are being honest, is the overarching message they are sending. It is important for us to be mindful that these workers have as much right to these parking spaces as we do, so long as they are not in violation of government-posted parking guidelines. I do not wish to make assumptions about the true intent of the group of Hill residents who chose to have these signs made – undoubtedly at great expense since they are metal, and colorful – but when I see signs posted in our neighborhood, by our neighbors, that clearly target minority construction workers and attempt to expressly limit their access to public space, I think racism. These signs are being posted by our neighbors to keep “others” out of our space while preserving it for themselves. At risk of hyperbole, these signs may as well say “white homeowners only” because that is the result they seek to achieve.

We have obviously had many non-resident workers parking in our neighborhood for years, as many who work at the dozens of businesses on 8th Street undoubtedly commute to work by car. It is an unfortunate indictment on the latent underbelly of our neighborhood that neighbors only chose to care about this act when those workers became decidedly non-white and non-English speaking. …

If those on the Hill wish to reserve parking for themselves, they are welcome to purchase property with accompanying private parking. Otherwise, they have absolutely no right as private citizens to determine who may use public street parking. Now more than ever it is important for our message as Hill residents to be one of inclusion, regardless of race, income, or job status. I think we can agree that these signs do exactly the opposite.”