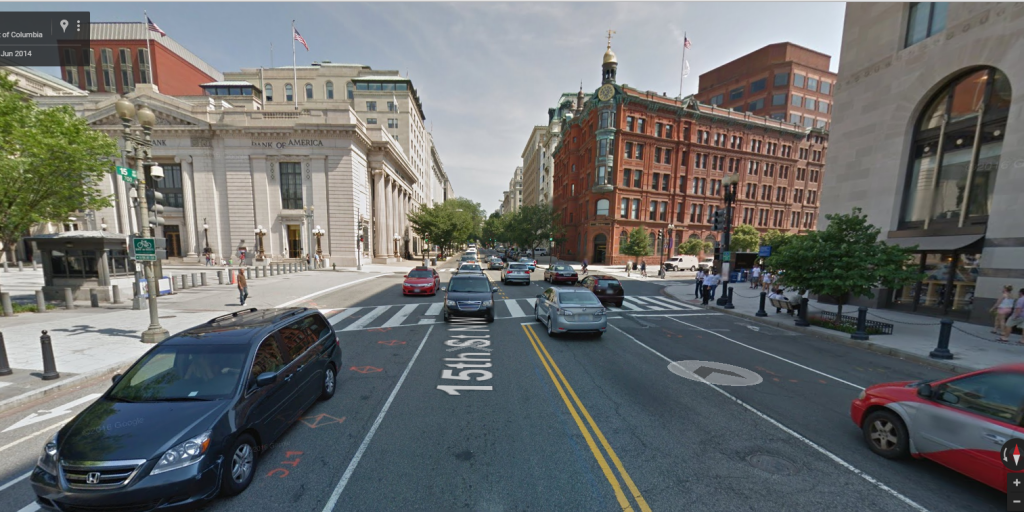 Seeking to raise awareness about a crosswalk that I have now had problems half a dozen times at. When I cross from the Treasury building across 15th towards Old Ebbitt Grill, despite having the walk sign, drivers honk and scream and refuse to stop. A few weeks ago I was with my niece, who is 8, and a driver accused me of child endangerment for walking with the walk sign across the intersection. This was during rush hour, and I understand that were all battling SafeTrack but it’s unnecessary and unsafe.

Has this happened to anyone else? It seems to happen to me only at rush hour, but every time I use it at rush hour. Hoping to get advice on how I can bring awareness to drivers that the walk sign is there since they don’t seem to be able to see it.

I captured the image of it on google earth (above.) Essentially what seemed to be happening was that 15th was backed up with cars coming straight down towards the freeway on ramps, and cars trying to left from New York Ave onto 15th. I was trying to cross across 15th from Treasury, towards that White House Gift Shop tourist mecca at rush hour to meet family for dinner at Old Ebbitt. When the cross walk turned in my favor I waited for the cars in to advance a bit out of the intersection, then proceeded to walk with my 8 year old niece in the crosswalk. Traffic began moving (I THINK from New York Avenue drivers turning left, though I could be mistaken) and they didn’t seem to realize or care that we had a walk sign and accelerated at us and began honking as if trying to prove a point. One of them was a cab driver and he started yelling and his customers in the back leaned out and yelled “I hope you value your life as much as that child’s because you deserve to get run over you dumb bitch” which was EXACTLY what my 8 year old niece needed to hear. It was obviously disturbing to me, but she’s 8 years old and lives in the suburbs and it was outright terrifying for her.

This was at rush hour in the evening. I tried to shake it off, but I don’t want it to happen to anyone else and everytime I use this intersection at that time of day its similar (although this occasion was by far the worst.) I’m not looking for sympathy, or a conversation about how horrible drivers are, or a debate about owning a car in the city. I am hoping to bring attention to this intersection to make it safer.”

Read more →
More Stories
“So heads up babies and be safe this summer of renting!”Today’s Rental is a “Magnificent, sun-filled, expansive 2BD/2 en-suite baths”