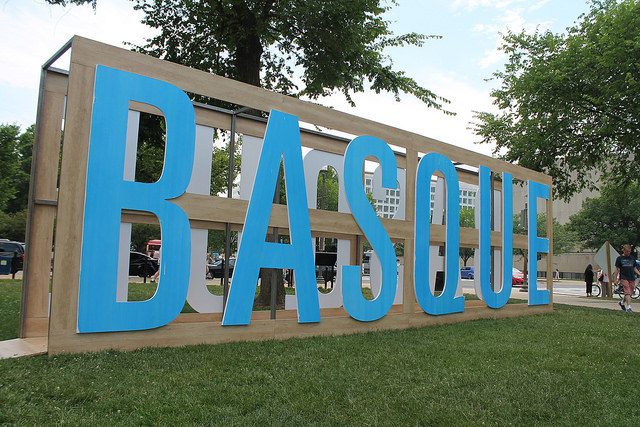 “Taberna del Alabardero will represent the diaspora of the Basque Country at the 50th annual Smithsonian Folklife Festival June 29th thru July 28th. Taberna del Alabardero is a fine dining, Spanish cuisine restaurant and Washington favorite for 28 years, located at 1776 I Street NW. Generally, Taberna’s menu offerings include new approaches to classic Spanish tapas and entrees, as well as recipes and ingredients that are fresh and organic, to include vegetarian selections. New creations that are incorporated into menus seasonally, showcase the range of authentic Spanish cuisine along with the extensive wine, Spanish brandy, and sherry lists. Chef Javier Romero has prepared a fast casual, traditional Basque Country menu for Folklife Festival attendees.

The Basque country is a region in northern Spain which also includes southwestern France. The cuisine is dominated by fish and seafood, specifically freshwater fish, and salt cod, and inland cuisine with fresh and cured meats, vegetables and legumes. The mixture of sea and mountain cultures are represented in the flavors and culinary traditions. The Basque Country is rich with Michelin-starred, one-of-a-kind dining experiences and is also known for its landscape, ciderhouses, large cuts of meat, and tapas bars. As a Basque Country presentation, Taberna del Alabardero will present the following menu at this year’s Smithsonian Folklife Festival:

This locally produced sausage is a ‘must try’ when you’re in San Sebastian. Slightly thinner than chorizo, this high fat delicacy is made from minced pork and beef, flavored with garlic, salt and paprika, and encased in lamb tripe

Tolosa, located about twenty miles south of San Sebastián, in the Basque Country, The dried red beans of the region are particularly flavorful and thus highly prized and Tolsa is served at numerous bars or restaurants

A dish capable of satisfying the most demanding palate, Txangurro, is obtained from the exquisite culinary wealth of northern Spain. Made using the traditional recipe, Txangurro is based on spider crab meat, with a pronounced flavor, is served hot covered with breadcrumbs and butter for later cooking au gratin

Sukalki is a traditional Basque Country dish made with meat and potatoes. Sukalki is original from Armintza (Vizcaya) principally comes from the “attites” or “grandfathers” in Euskera Languaje. The meat has to be sautéed first to create a protective layer, this way it doesn´t lose its juices during preparation.

The pantxineta is a typical dessert of the Basque Country. It consists of a bun of puff-pastry filled with thick custard cream; it is topped with almonds and often decorated with icing sugar. The “pantxineta” as a tart of puff-pastry and custard cream created at the beginning of the 20th century in San Sebastian by the House of Otaegui, a local patisserie and is now considered one of the cornerstone deserts of Basque gastronomy.”