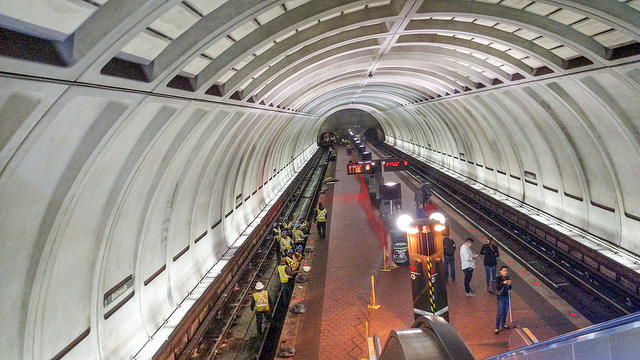 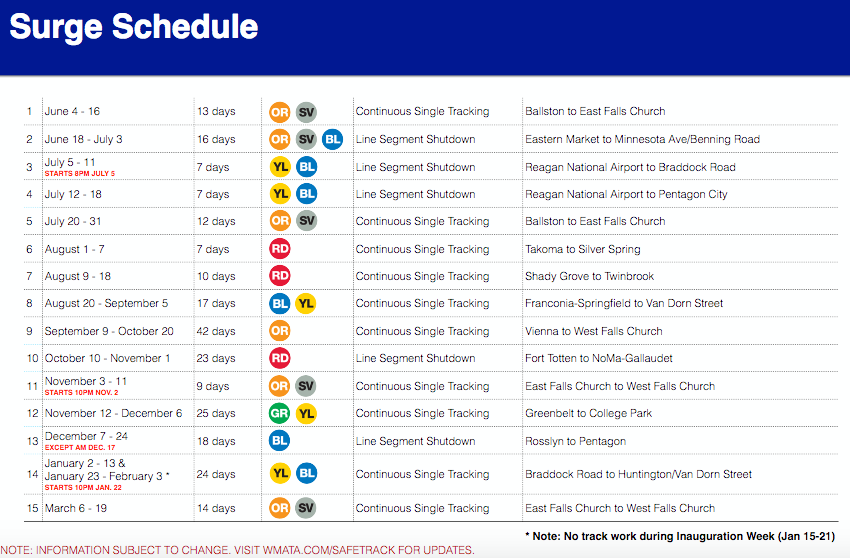 Following review and collaboration with FTA, as well as consideration of traffic mitigation and alternate travel options by the Department of Transportation (DOT) agencies in the District of Columbia, Maryland and Virginia, regional law enforcement, Office of Personnel Management (OPM), Department of Homeland Security (DHS) and General Services Administration (GSA), the implementation of SafeTrack will commence immediately.

“I am encouraged by the region’s response to SafeTrack and appreciate the support of business and community leaders, jurisdictional officials, our Congressional delegation and most importantly the riders, who have rallied to help us get through this challenging work,” said Wiedefeld.  “I also want to recognize FTA for their collaboration and guidance, which is reflected in the final plan.”

In addition to the Safety Surge projects, SafeTrack also includes closing the Metrorail system at midnight every night (rather than at 3 a.m. on Friday and Saturday nights) and expanding weekday maintenance opportunities by starting selected work at 8 p.m., rather than 10 p.m.

Each of the 15 Surge projects will result in either around-the-clock single tracking or shutdowns of selected track segments and will have a significant impact on rush-hour commutes. Many of the Surges will severely reduce the frequency of trains, resulting in crowding and extended wait times. When a Surge is underway on a particular line, Metro riders who have the ability to do so may be asked to use alternate travel options and avoid Metro until the project is complete.

“Safety comes first, and I want to remind the region that SafeTrack is not just about the 15 maintenance surges,” said Wiedefeld. “SafeTrack also includes weeknight work that will require single track operations in sections starting at 8 p.m.; it means closing the system at Midnight on weekends as opposed to 3 a.m. and committing to a moratorium on extra hours of early morning or late night service when it conflicts with track work.”

The first Surge project will begin on Saturday, June 4, and involves continuous single tracking between East Falls Church and Ballston stations while miles of deteriorated wooden rail ties are removed, the substructure of the railroad is rebuilt and new ties, fasteners, ballast and other infrastructure is installed. The duration of this project is 13 days and will result in reduced service at all Orange and Silver line stations, especially those stations west of Ballston where trains will only run every 18 minutes. Due to reduced capacity and expected longer travel times, Orange and Silver line customers are strongly encouraged to consider alternative travel options and avoid traveling during rush-hour periods.

For the first Safety Surge, Metrorail customers are advised of the following service information:

The complete schedule of Safety Surges is available here.

Independent verification and inspection of track work will be performed regularly to ensure that the work is being done correctly and efficiently.”