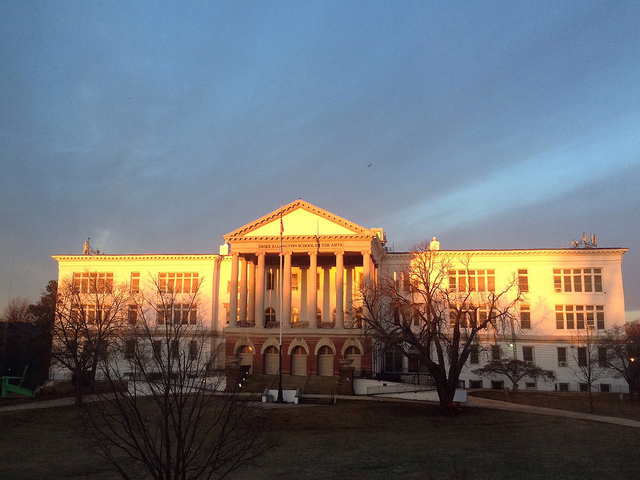 Office of the District of Columbia Auditor:

“The cost of a new Duke Ellington School for the Arts has grown from $71 million to $178 million without a comprehensive review by the D.C. Council on the location, other cost drivers, and all of the elements required for a performing arts high school, according to a new report by the D.C. Auditor.”

The Department of General Services Failed to Provide Information the DC Council Needed to Make Informed Decisions on the Scope and Cost of Modernizing the Duke Ellington School of the Arts
What ODCA Found:

 The Department of General Services (DGS) and The District of Columbia Public Schools (DCPS) failed to provide timely information to policy makers so they could make informed decisions on the location and desired level of investment for a new performing arts high school.

 DCPS did not finalize Educational Specifications for Duke Ellington School of the Arts before DGS proposed the project for inclusion in the FY 2012 District’s Capital Improvement Plan (CIP) adopted by the Council.

 DGS based initial and subsequent cost estimates for Duke Ellington on significantly different projects that did not take into account the costs required for a performing arts school.

 DCPS, DGS, and the Executive Office of the Mayor were not transparent while considering alternate sites for Duke Ellington—sites that might have cost less and/or better served the needs of the student population.

 DGS and D.C. Partners for the Revitalization of Education Projects, LLC (DC PEP) did not timely and accurately assess the need for and the cost of underground parking and other elements of the school at the Georgetown location.

 The Project has seen significant delays as DGS and DC PEP have missed many of the benchmark dates laid out in the CIP and supporting documents. DGS and DC PEP underestimated the amount of time the design phase would take, causing a delay in schedule. Delays in meeting deadlines has contributed to the construction phase’s guaranteed maximum price still not being agreed upon.

 DGS has failed to require DC PEP to comply with its contractual obligations to the District government with regard to the Duke Ellington project. DGS failed to require its program manager to provide project management services consistent with the contract.

 DGS (and its predecessor, OPEFM) made decisions early on in the School Modernization Program that deprived the District of the use of competition as a tool to control costs.

 The decision by DGS (and its predecessor, OPEFM) to use Design-Build procurement without competition on cost may have contributed to higher costs in the Duke Ellington School of the Arts modernization.

 The existing DGS Procedure and Delivery Manual is unclear and contradictory and does not provide guidance that promotes accountability. It has also not been followed consistently on the Duke Ellington Project.”