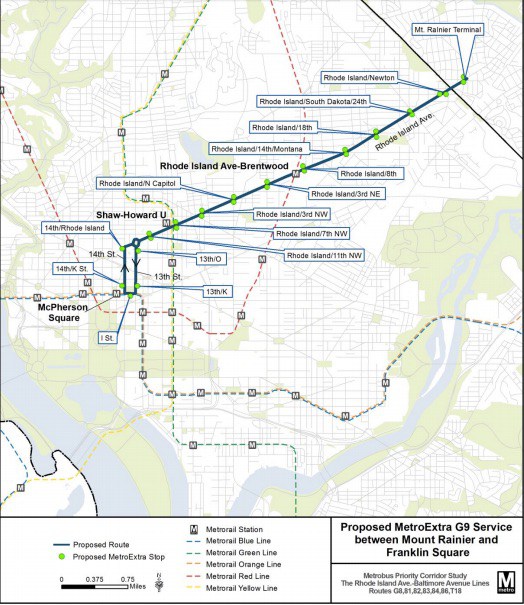 RIA Main Street is pushing for funding of the proposed G9 bus line in the upcoming budget. The G9 would run almost all the full length of Rhode Island Avenue within the District, providing a direct link from Mt. Rainier, MD, through Woodridge, Langdon, Brookland, Brentwood, Edgewood, Eckington, Bloomingdale, Shaw, the U St. Corridor and Logan Circle, to Franklin Square. As a prolific bus rider who recently migrated from the western end of this proposed line to the eastern end, I can tell you that trying to get to through most portions of this route via transit is rough. The many bus lines on the eastern end turn around at the Rhode Island Ave. metro and the G8, which is probably the closest existing line, zigzags all around and only sticks to Rhode Island Ave. between 4th St. NE and 9th St. NW.

This line would be critical to cross-pollinating people/business between thriving areas of NW and hopefully soon-to-thrive areas of NE.

Here’s how to lend your voice to support the G9 route:

Help us spread the word about funding for the G9 – we need all of your voices to get the funding to make this bus line a much-needed reality for Rhode Island Avenue.“

more stories
Previous
“The driver of the vehicle offered the child candy, and attempted to lure the child into the vehicle.”

Next
Mark It – Rain or Shine – Sundress Fest is Sunday!!