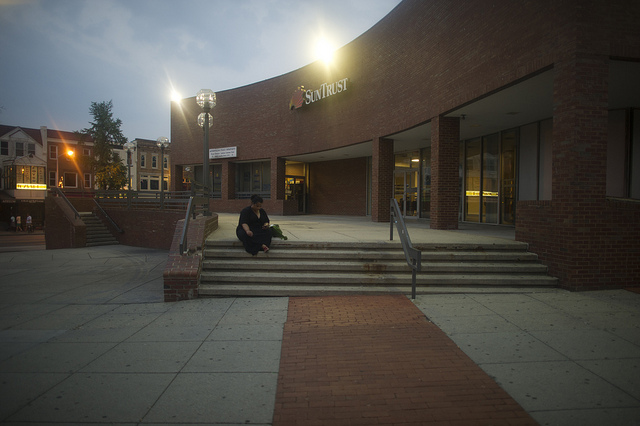 Have you been following the Adams Morgan SunTrust plaza redevelopment discussions? Obviously its an eyesore as it currently exists, but it will be a real bummer if we lose the farmers market.

Here’s a message from Star Hollow Farm, which has a CSA drop off there year-round and participates in the farmers market in season.”

SunTrust Plaza – Community Meeting on April 20th at 7:00 PM
PLEASE COME AND SHOW YOUR SUPPORT FOR THE COMMUNITY PLAZA AND THE FARMERS MARKET

We are writing to provide an update concerning developer PN Hoffman’s proposed plans for the SunTrust property where we have our market and CSA handouts.  PN Hoffman has submitted revised plans to ANC1C, which can be viewed here, under the “revised design drawings” link (it takes about a minute to download):

Plans were revised based on public input re maintaining the farmers market and open space, which the developer learned there was strong interest in. While the revised plans preserve a small plaza, that space will be used primarily by PN Hoffman’s own commercial tenant, and does not leave any room whatsoever to host our weekly farmers market or the other community uses to which the space is put from time to time. As such, the revised plan fails to comply with the multi-year “Envision Adams Morgan” community planning process that included the following recommendation:

“Ensure key open spaces and focal points within the commercial corridor of the neighborhood, such as the SunTrust Bank plaza at 18th Street and Columbia Road, continue to serve as functional community gathering spaces.  Consistent with community aspirations to see redevelopment of the SunTrust Bank property, any future design should include a flexible plaza space at the intersection of 18th Street and Columbia Road for events and programs.”

PN Hoffman has requested that they be included on the April 20th agenda of ANC1C’s Planning, Zoning, and Transportation Committee.  The meeting will be held at 7:00 pm at Mary’s Center, 2355 Ontario Road NW.  We urge as many of you as possible to attend this meeting and tell PN Hoffman (and SunTrust)  that they need to do better.

Between now and then, PN Hoffman has requested a conference call with us farmers from the market (only the veg vendors probably) to discuss further options. All along their tack has been to move us across the street (and our of their way).

We’ll try to keep you posted!
Randy and all at Star Hollow Farm