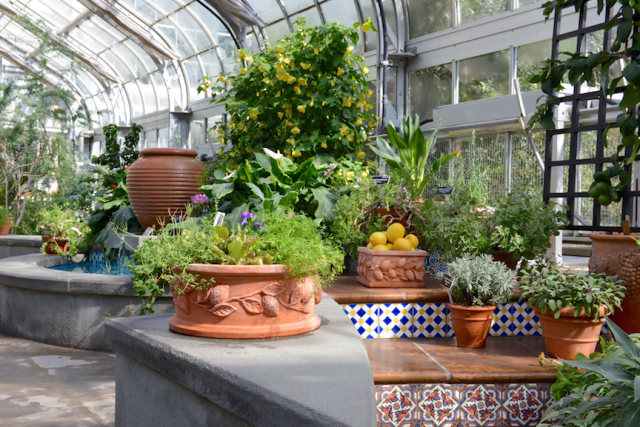 “A new Conservatory room focused on the plants of the world’s five areas with Mediterranean climates opens to the public today at the United States Botanic Garden (USBG) in Washington, DC. Named for the climate of Europe’s Mediterranean Basin, four other locations – California, Chile, South Africa, and Australia – share this climate known for its hot, dry summers and mild, wet winters. More than 10% of all known plants are found in Mediterranean areas.

A large, 53-foot watercolor mural of plants and land- and seascapes from Mediterranean areas, created by the USBG’s resident illustrator, fills an entire wall behind the plants on one side. Across from the mural, brightly colored Mediterranean tiles line tiered steps and the inside of a fountain, evoking a traditional Mediterranean garden. This is the first time a room has been re-themed since the Conservatory reopened in 2001 after renovation. The USBG is planning programs and activities related to food, agriculture, conservation, and plants of the Mediterranean regions.

The U.S. Botanic Garden is open to the public, free of charge, every day of the year from 10 a.m. to 5 p.m. The Conservatory is located at 100 Maryland Ave. SW, on the southwest side of the U.S. Capitol.“