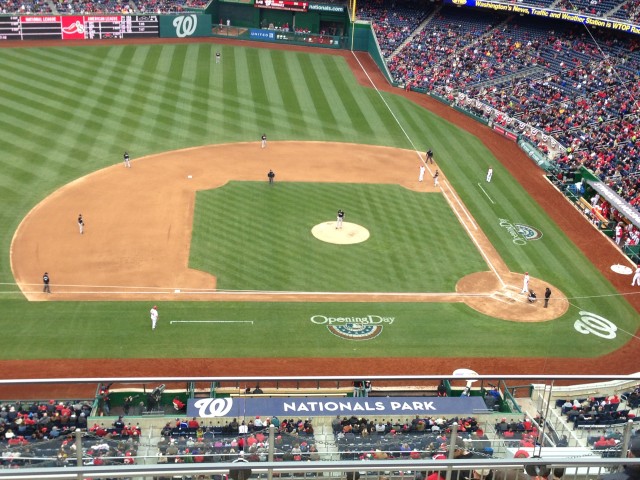 “Washington, D.C. chef and restaurateur Mike Isabella is opening two new eateries at Nationals Park, home of the Washington Nationals, in Southeast Washington, D.C. this season. Kapnos at the Park will be a spin-off of his popular brand of Greek restaurants serving unique gyro sandwiches, while Catchfly Kitchen offers Nats fans Southern-style fried chicken and St. Louis-style ribs. The two concepts will be located side-by-side on the Gallery Level, behind Section 301. Isabella already operates a location of G at Nationals Park, his popular Italian sandwich shop, on the Main Concourse behind Section 136.

“Our location of G at Nationals Park has been such a blast that we jumped at the chance to open up new concepts at the ballpark,” said Chef Mike Isabella. “And it’s not just an opportunity to sell more food; the Nationals organization and their fans have a special relationship that translates to a lively and engaging game-day experience that we are proud to be a part of.”

Kapnos at the Park

The menu at the newest addition to the Kapnos family will include Isabella’s take on Greek gyros. Pita will be stuffed with marinated lamb, chili-roasted steak, falafel and crispy Greek fried chicken. Hummus and tzatziki will be available as side orders, along with fried potatoes dusted with Aleppo pepper and served with Greek island sauce.

Catchfly Kitchen, a brand-new concept by Isabella, looks to the South for inspiration on a menu led by fried chicken sandwiches and St. Louis-style barbecue ribs. Catchfly is named for a flower that is found throughout the South, with a nod toward one of the most common plays in baseball. Additional menu items include popcorn chicken, fried pickles and banana pudding.

Liquid offerings are a big part of both Kapnos at the Park and Catchfly Kitchen, with each serving a signature cocktail on tap. At Kapnos at the Park, Mike Isabella Concepts beverage director Taha Ismail is leading off with one of his heavy hitters, the watermelon lemonade cocktail that’s been a staple on 14th Street since the original Kapnos opened. At Catchfly Kitchen the team is going tried and true, serving draft mint juleps as a classic quaff for long summer days.

Kapnos at the Park and Catchfly Kitchen will open at Nationals Park for the Nationals’ exhibition game against the Minnesota Twins on April 2, and remain open throughout the season.”