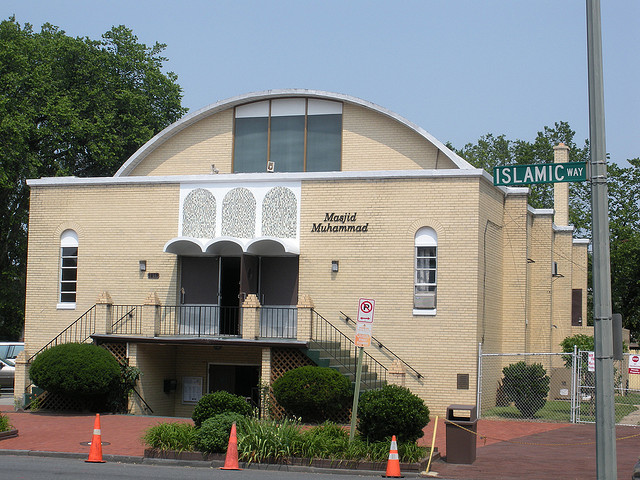 Thanks to a reader for passing on: “I thought PoPville might want to learn about this appalling situation. The good folks at the mosque on 4th Street in Truxton Circle circulated this flier warning about anti-Muslim demonstrations this weekend.”

“Masjid Muhammad (MM) was recently notified by federal and local law enforcement agencies That anti-Muslim demonstrations are scheduled for October 9th & 10th in front of 20 mosques Across the country. There is a possibility that one of these demonstrations could take place at any time in front of MM on Friday or Saturday and may occur during our Salatul Jumma prayer service.

Imam Talib Shareefand the MM Board ofAdvisors urges all members and visitors to avoid any contact and/or confrontation with these demonstrators as we know that their goal is to not only intimidate and terrorize Muslims, but to also illicit a response from us in order to create a violent confrontation which they can use against us. They will then say: “You see, we told you that those Muslims are violent!” Their first tactic was to bait Muslims by conducting a cartoon contest in Texas vilifying Prophet Muhammad. The Muslim community in Texas was well-prepared and refused to respond. Unfortunately, two alleged Muslims traveled from California took the bait and were killed. Do not allow the demonstrators to provoke you into anger and remember our Prophet’s instructions: “Do not become angry, do not become angry, do not become angry.”

The DC Metropolitan Police Department (MPD), the FBI and the Office of Homeland Security have been contacted and members of the MPD will be assigned to maintain the peace. Imam Talib Shareefand the MM Advisory Board have not in any way whatsoever, hinted, urged or requested that any member or visitor, or any MM staff member, bring any form of firearm or other type of weapon to, in or around MM in response to the demonstration. Members of the MM Security Team will be visibly present within and outside the masjid to assist MM members and visitors on Friday and Saturday.

Thank you for your cooperation and may Allah (SWA) strengthen our unity, guide and protect us and reward our patient perseverance.”