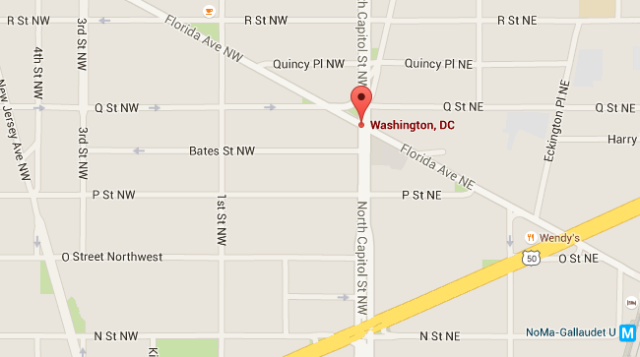 Yesterday around 3pm I was in my car waiting at a red light at the corner of Florida Avenue and North Capital Street when 3 men circled my car and started yelling obscenities and cursing at me. One of them came up to my drivers’ side window and repeatedly cursed at me before trying to break my window with a knife or some other thing with a blade. Fortunately I had decided to keep my windows up because of the heat, and he did not succeed in shattering my window and merely scratched it.

This is the third time this past week that a man, in some way, has harassed me on or near this area/intersection. The first, I was walking on Florida Ave near 2nd street NW and a man on a bike made sexual comments to me. The second time was when shortly after that encounter, I met a friend at Bistro Bohem; we sat outside on the corner (we were the only ones seated outside) and while we were waiting for our food, I could see a different man from my peripheral vision approaching us and holding a Solo cup. He entered the seating area, stood within an inch of me and stood there looking down at me without saying anything. I asked him what he wanted and he asked me for change; I told him I had no change (which I didn’t) and he continued to stand there for 10 seconds just looking at me before walking away; I was honestly preparing what my next move would be in case he decided to hit me because that was the kind of posturing he was demonstrating.

If you are a (female) biker or pedestrian, I would avoid the aforementioned intersection and the blocks leading to it; if you are driving through, might be best to keep your windows up, too. I don’t plan on sitting outside at the neighboring businesses anymore if I’m the only person or one of a few, and don’t think that’s a bad idea for others, either, since no one inside the restaurant saw what had happened. I’m not a naive alarmist who doesn’t know how to take care of herself in cities; I’ve grown up and lived in large cities my whole life, and have been frequenting and living in this particular neighborhood cumulatively for the last 3 years without any aggression from anyone. These experiences in succession in such a short span of time may just be coincidence or bad luck, but they could also reflect that something more insidious might be occurring in our neighborhood.”

Read more →
More Stories
One Way to Deal with Big Red Line Crowds?Parking in the Cycle Track Continues but Why are there still Parking Meters?