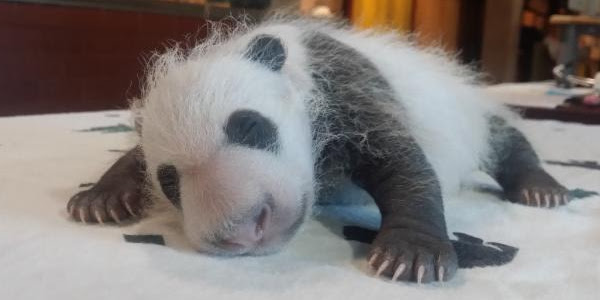 Earlier this week we learned that the panda cub had grown to a “a whopping 1.9 pounds”. Now the Zoo sends out an even cuter photo and let’s us know that Bao Bao is doing well too:

“Our giant panda cub continues to pack on the grams. As of September 14, 2015, the cub weighs 881.5 grams (1.9 pounds). He has actually grown so much that he is now too big for Mei Xiang to pick up in her mouth! She often shifts his position now using her arms instead.

The bigger the cub gets the more distinct his iconic panda markings get.His back saddle (the black marking on a panda’s back) is becoming more distinct. And it looks like Tian Tian’s!

Panda cam viewers may notice the cub spending much of the day sleeping, which is typical of a giant panda his age. The keepers spotted him sleeping with his hand over his eye. This is a position Tian Tian, and sister, Bao Bao, like to sleep in frequently too.

Bao Bao is doing well and spends most of her days enjoying enrichment items and toys the keepers have set up for her in her yard and in her indoor enclosure. Since Mei Xiang is still choosing not to venture outside, Bao Bao has been able to play in her yard and Mei’s yard. She’s even spent some time up in her old hemlock tree, though it seems like she could be close to outgrowing it at 137 pounds (62.2 kilograms). Although she’s been busy outside, inside she has been very quiet since Mei gave birth. Keepers noticed the same behavior from Tian Tian as well and have seen it from him in years past. Although neither Bao Bao nor Tian Tian have seen the cub, both are aware that there is a female with her cub nearby.”