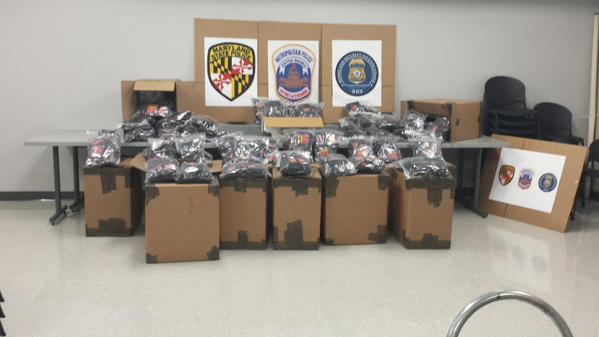 “The Metropolitan Police Department’s Narcotics and Special Investigations Division announced today the arrests of two individuals in connection with the interception of a 500 package that contained 116 kilos of synthetic drugs. The seized packages contained more than 19,000 packets of “Bizarro” drugs, its contents containing XLR-11, a Schedule 1 Controlled Substance, which is the largest single seizure of synthetic drugs in the District – with an estimated street value of $2.3 million.

At approximately 12:52 pm, on September 1, 2015, MPD detectives with assistance from Homeland Security Investigations and Drug Enforcement Administration special agents arrested 33-year-old Siraj Issa, of Northwest, DC and 41-year-old Yenework Abera, of Alexandria, VA, in Northwest, DC. They have been charged with Possession with Intent to Distribute Synthetic Cannabinoids.

“As I have said, we must intercept illegal drugs at the source. The seizure of such a large amount of synthetic drugs is a relief to both the MPD and the community,” said Police Chief Cathy L. Lanier. “The hard investigative work that our members pride themselves on has potentially saved countless lives and helped to stem the violence that goes hand in hand with the selling and consumption of illegal drugs.”

“Synthetic drugs pose a serious public health and safety issue to our communities,” said Clark Settles, Special Agent in Charge for US Immigration and Customs Enforcement’s Homeland Security Investigations, Washington, DC office. “This operation’s success is a testament to the excellent working relationship between our agencies and sends a clear message to anyone involved in illicit drug trade that we are united in our efforts to disrupt and dismantle their operations.”

“Through this extraordinary coordination between DEA, HSI, and MPD, nearly 300 pounds of this lethal drug will never touch the streets of DC,” said Karl C. Colder, Special Agent in Charge of the Drug Enforcement Administration, Washington Field Division. “Ruthless drug dealers are marketing these drugs as a harmless substance. Make no mistake, synthetic cannabinoids are a poison. DEA stands strong with our partners in combating synthetics, and will use all of our resources to bring traffickers of this drug to justice.”