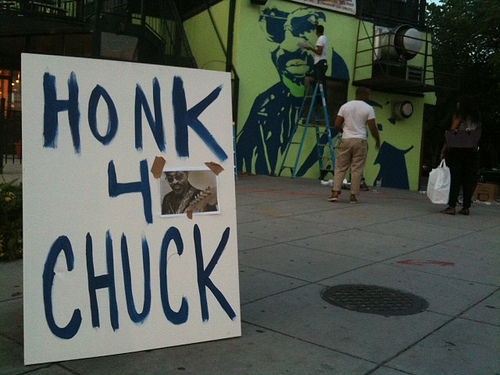 Thanks to those who forwarded from ANC Rep Nolan Treadway:

“Chuck Brown Day is coming and it’s going to be GREAT!

Since Wednesday there has been a lot of buzz about Chuck Brown Day, scheduled for Saturday, August 22 at Chuck Brown Memorial Park. It seems to have begun with a Facebook event for the concert which had approximately 3000 RSVPs as of last week. While there are legitimate concerns about planning for an event of this size, it is important to understand that these RSVPs are not solid confirmations and in our social media-driven world, that number is nearly meaningless.

That said, there are legitimate concerns regarding crowd control, transportation, public safety, general noise and clean-up. I have been talking to many officials from DC Government since late Wednesday and I have concluded that the District of Columbia government is prepared to handle Chuck Brown Day. This will be a popular event, but I believe August 22 will be a fun day for our neighborhood and for DC. I can offer more detail about the plan in the section below. But know that I support this event and am very confident it will go smoothly.

If you have questions or concerns about anything here, please don’t hesitate to reach out to contact me online or even on twitter, @ANCNolan. Everyone is interested in this event going well and if you’ve got feedback we can use prior to the event, we would welcome it.

Notes and details of a recent planning meeting for Chuck Brown Day:

20th Street NE will be closed, probably Franklin to Rhode Island Ave.
Four intersections around the park staffed with DDOT personnel.
There will be 2 tow trucks in the neighborhood on call to tow illegally parked cars (ie blocked driveways) and an additional 15 parking enforcement officers in the neighborhood.
DDOT will be parking cars on the athletic field at 24th and Franklin and they are looking to confirm more of the parking lots in the area.
Safety

Fire and EMS will have first aid support on 20th Street.
Park rangers and other DPR staff will be on hand to assist.
MPD is still determining exact numbers but are engaged in this process.
There are dozens more additional volunteers working the event in various capacities that will be on hand
Trash, Clean-up

Dept of General Services and Dept of Public Works

Department of General Services will have staff to collect trash in the park during and after
Department of Public Works will be on hand to remove trash from outside the park – and neighboring yards – after the event.
Street sweeping to occur by end of day on August 22.
Stage and Performance Details:

The show was originally 3 bands for four hours, but out of concern for neighbors it has been reduced to a 2 hour program and just the one band performing (Chuck Brown Band).
The stage will be set in Chuck Brown Memorial Park plaza and it will be active from 4-6pm on Saturday, Aug 22.”