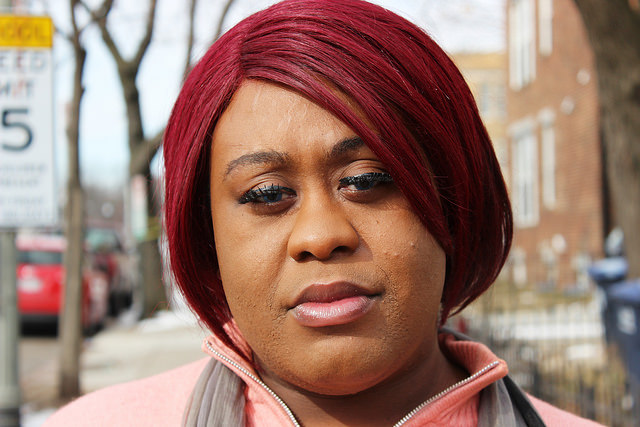 Author’s Note: In honor of International Day Against Homophobia, Biphobia and Transphobia, this week the Person First Project is featuring the powerful six-part story of a young, transgender individual named Lazema who is experiencing homelessness in our nation’s capital. We hope Lazema’s story will help raise awareness about the special and difficult challenges faced by transgender individuals, and particularly those experiencing homelessness.

Have you ever experienced discrimination?

“Yes; as Lazema, as a woman, and as a man not dressing up. Because even when I’m not dressing as a woman I’m still very, very feminine, and you know people. When I was at [a local shelter] there is this guy there. He’s horrible. I’ll come in and he’ll be like, ‘So, do you want to suck my d*ck?’ I’m like, ‘What?!’ He can make life really hard for me if I’m not nice to him. And he kind of stated that ‘It can be easy for you here, or it can be hard for you here. If you accept my advances, if you let me toy with you, and you let me belittle you, you’ll have a really good time here. We’ll save your bed. You’ll be fine. But if not, things are going to be tough for you.’

For a time period I was going along with it. I never said, ‘Yes, I will suck your penis,’ but I was like, ‘Oh stop playing, I don’t do stuff like that,’ and just laughing it off. Then I got to this point where I was really angry. Like, why do I have to do this? Why can’t I just be cordial and respect you as an employee and then you’re just nice? Why do I have to go through all this? Why do I have to play all these gay games? Like to play with corn and like it. I have to perform like some kind of circus creature.

After I was like, ‘No, I don’t want to do it,’ all hell broke loose. Every time I would walk past he would snicker, like high school. Or he would be like, ‘Ew!’ and try to sick the wolves on me. Sometimes when it was time for lights out he would let us charge our phones in the eating area, but since I wasn’t talking to him or indulging him he would tell the guys, ‘Usually I let you stay out here, but because somebody don’t want to leave (pointing to me) you all have to go back to your rooms.’ So everyone was mad at me. From that moment on they would be like, ‘Man you’re going to mess it up for us, so why don’t you just leave?’

One day… this is really the thing that got me mad. I had left [the shelter], but I had to be back before 9 o’clock. So I came back before 9 o’clock and he was like ‘No, we can take your bag if you’re not back in 30 minutes.’ I was like, ‘I didn’t know that.’ He said ‘It’s in the rule book.’ So I was there pleading with him, and he’s playing with me, playing the gay games again. There’s another guy there who’s gay but he’s not trans. He does everything [the shelter employee] says; he will fill his water up, he’ll take his soup and heat it up and bring it back. [The shelter employee] said, ‘See, you have to be like that. You have to be trained.’ I said, ‘You can’t train me.” He said, ‘Oh we’ll see.’ So a whole hour has passed and [the shelter employee] said ‘What’s my name?’ and [the gay man at the shelter] said ‘Big Daddy.’ So I had to call him Big Daddy. I played, and I called him Big Daddy. And he said ‘Your bag’s in the back.’ He had my bag the whole time. He made me think that he had given it away, just to make me call him Big Daddy. I felt so bad after that. I felt like … like, nothing. It was going to continue if I allowed it to.

It was really bad. But I had to put up with it, because it’s basically one of the cleanest shelters in D.C. There’s not a lot of people. If you’re a guy, you don’t have anything to worry about. But if you’re gay or trans, you have to deal with being treated really unfairly.

He didn’t see me like this [trans]. If he sees me like this, it’s going to be much worse. So, I was like, let me just leave. And that’s what I did.”