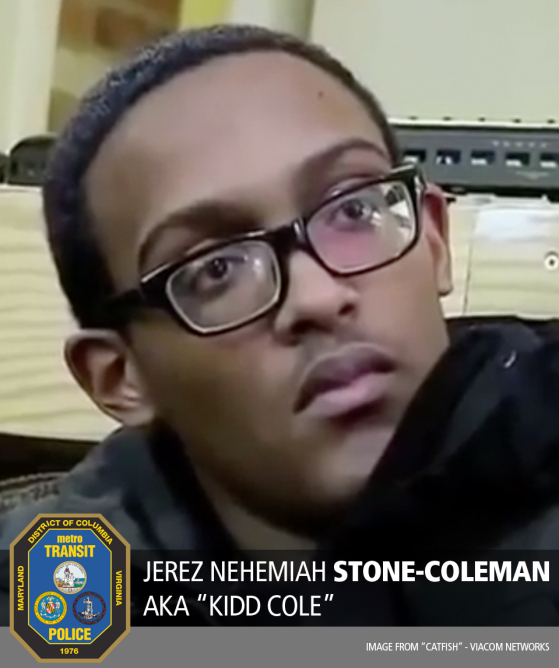 Stone-Coleman was arrested by MTPD officers and detectives this morning at his residence in the 1600 block of Fort Davis Place, SE, in Washington, D.C.

According to the Criminal Complaint in United States District Court for the District of Columbia, Stone-Coleman is alleged to have “knowingly [conveyed] false information concerning an attempt or alleged attempt to engage in terrorist attacks or other violence against mass transportation systems,” in violation of 18 U.S.C. § (a)(9).

Between December 12, 2014, and May 12, 2015, the Metro Transit Police Communications Division received eleven telephone calls via the 911 emergency system reporting bomb threats and/or hostage situations at or directed against Metro stations, trains and buses. In each instance, the caller conveyed specific threat information concerning destructive devices and intended acts of violence. Each report prompted an emergency response by Metro Transit Police and in some cases other law enforcement agencies. The threat information provided in each of the 911 calls turned out to be “wholly false,” according to the Complaint.

On January 20, 2015, the caller claimed that people “from France” told him that they planned to ambush the President’s motorcade and assassinate him that night. The caller went on to say that the same people had placed bombs around the Potomac Avenue Metro station, and also planned to kill a police officer. As a result of these threats, the entire Potomac Avenue Metro station was shut down and sweeps were conducted to check for the reported bombs or other destructive devices.

On January 22, 2015, the caller stated that he and his friends were planning to take hostages on Metrobus 6149 and that they would kill the hostages if they were not paid a $15 million ransom.

On February 22, 2015, MTPD received a bomb threat against Metrobus 7130 from a caller who advised that an individual wearing “all black clothing” and glasses had threatened to blow up the bus and was brandishing an AS-50 sniper rifle. The caller advised that the bus was near the Capitol.

On May 12, 2015, the caller claimed that someone had approached his nephew and told him that he/she was planning to blow up the Metro station.

In another 911 hoax call, a violent threat was conveyed against a Metrobus in the District of Columbia. The bus was stopped, evacuated and an innocent citizen who matched the lookout given by the caller was detained, questioned and frisked.

On April 14, 2015, the caller told a 911 dispatcher that a bomb had been placed at the McPherson Square Metro station, and that there was a bomb at the White House.

On May 5, 2015, the caller claimed that he had received information that certain individuals were planning to blow up a bus at the Potomac Avenue Metro station.

Metro Transit Police detectives used cellular phone records, digital video surveillance from stations and buses, and telephone audio to identify Stone-Coleman. A warrant for his arrest was issued on May 26, 2015.

“We have no greater responsibility than protecting Metro’s customers and employees,” said Metro Transit Police Chief Ron Pavlik. “This case demonstrates the seriousness with which we take all threats and the lengths to which we will go to bring those responsible to justice.”

in May 2014, Stone-Coleman appeared as “Kidd Cole” in an episode of the MTV reality show “Catfish,” a show that documents people who – according to the show’s website – “pretend to be someone [they’re] not by posting false information, such as someone else’s pictures, on social media sites usually with the intention of getting someone to fall in love with you.”

Read more →
More Stories
Help Getting an Abandoned Wrecked Car Removed?We’ve Talked A Lot About Branches But What About The Roots?