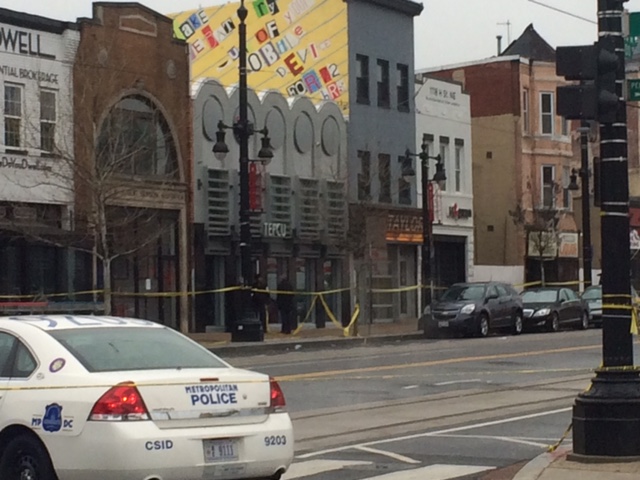 “The Metropolitan Police Department is investigating a police involved shooting that occurred in the 1100 block of H Street, NE. Preliminary information indicates that on April 9, 2015, at approximately 5:30 pm, officers from the Fifth District responded to a call for an armed kidnapping in the 1900 block of 3rd Street, NE.

The suspect fled with the kidnapping victim, an adult female, in a green Honda Accord, and approximately 30 minutes later, appeared at the offices of the United States Census Bureau, in Suitland, Maryland. At that time, a guard at the facility was shot by someone inside of the green Accord. At approximately 7:35 pm, Seventh District officers observed the green Accord in the Woodland Terrace area and began to pursue. The driver of the green Accord shot at officers in the 2700 block of Bruce Place, SE, and the pursuit continued to the intersection of 1200 block 3rd Street, NE where the suspect again fired at pursuing officers.

The pursuit continued into the 1100 block of H Street, NE where officers attempted to block the vehicle’s path, resulting in a crash. Following the crash, the suspect and a police sergeant were wounded by apparent gunfire. Both injured parties were transported to area hospitals for treatment. The female kidnapping victim was located safely.

The investigation remains ongoing. Anyone who has information regarding this case should call police at 202-727-9099. Additionally, information may be submitted to the TEXT TIP LINE by text messaging 50411.”

“Detectives from the Metropolitan Police Department’s Criminal Investigations Division have announced the identity of the suspect arrested after the police involved shooting that occurred in the 1100 block of H Street, Northeast on Thursday, April 9, 2015. The suspect, who remains hospitalized, has been identified as 48-year old Ronald Anderson of Southeast, DC. He was placed under arrest and charged with Kidnapping while Armed and Assault on a Police Officer while Armed. The MPD sergeant who was wounded is recovering and the adult female kidnapping victim was located safely.

Read more →
More Stories
Friday Question of the Day – Outdoor Seating do you prefer Picnic or Private Tables?Heads Up on Hummus Recall