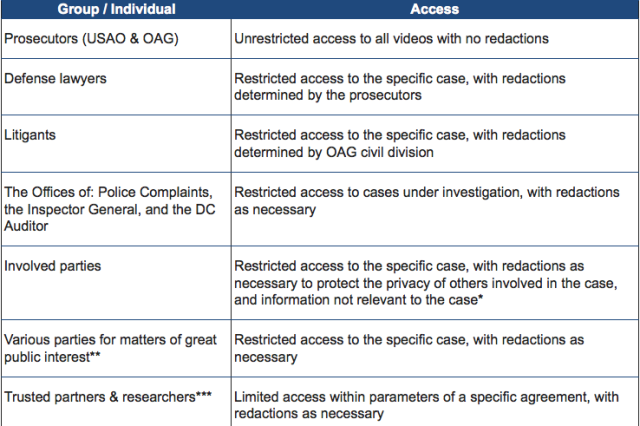 “Good morning everyone, as you may be aware MPD is in the process of deploying body worn cameras throughout the Metropolitan Police Department. I have received numerous inquiries regarding this endeavor. To help answer these questions, and to provide a better understanding of our program, we have created a fact sheet. Please see the fact sheet below.

The use of body-worn cameras (BWCs) can benefit members of the community and the Metropolitan Police Department (MPD) by improving police services, increasing accountability for individual interactions, and enhancing public safety. In 2013, MPD began researching the use, purchase, and deployment of BWCs for its police officers. While researching the program, MPD worked with law enforcement agencies across the country that have already deployed BWCs, as well as the independent District of Columbia Office of Police Complaints, the Fraternal Order of Police, the District of Columbia Office of the Attorney General (OAG), the US Attorney’s Office (USAO). The Department also discussed the program at community meetings throughout the city and with other stakeholders.

After 18 months of research, MPD launched a 6-month pilot on October 1, 2014, to determine the camera model that best suits the needs of the Department and city. After evaluating five different models, MPD selected models provided by Taser that allow officers to annotate video in the field, without taking officers off the street. Now, Mayor Muriel Bowser has included $5.1 million in her proposed Fiscal Year 2016 budget to fund implementation of a full-scale program to outfit all patrol officers with BWCs. Here are answers to some frequently asked questions to help you learn more.

Q: Will the videos from BWCs be open to the public?

A: One of the most critical issues for the BWC program is privacy. The District’ Freedom of Information Act (FOIA) for law enforcement records was developed before videos became common records, and never contemplated the complexities of protecting privacy. Even with redactions, it will be very difficult to protect the privacy of people engaged with the police, or even just passing by. Exempting BWC footage from FOIA, as is proposed in the FY16 budget, would bring the District’s FOIA policy in line with the federal government and many other jurisdictions.

Q: Why is privacy important for those interacting with police?

A: People often need to seek police assistance when they are going through difficult personal challenges. Juveniles and arrestees have strong specific privacy protections in District law, in part to mitigate the negative impact of open information about an arrest may have upon an individual’s ability to secure employment. In addition, victims have a right to be treated with fairness, dignity, and privacy, and to be reasonably protected from the accused. Because MPD is required to protect the safety and privacy of all individuals interacting with police, we proposed the video from body-worn cameras be exempt from FOIA as the best option for protecting very sensitive information.

Q: Who would have access to the BWC videos if they are exempt from FOIA requests?

A: Several groups outside of MPD would have either routine access or could gain access by request.

Q: If no one can see the videos from body-worn cameras, how do they increase police accountability?

A: Videos help to hold police accountable by recording what happens during an interaction. Most videos that members of the public record only capture part of an incident. Body-worn cameras, when used properly, will improve this by capturing an interaction from start to finish. Not everyone needs to be able to see every video in order to hold police accountable. It is most important that individuals who come in contact with the police be able to view relevant video, as well as any entity in the criminal and civil justice system and those that investigate the police.

Q: If the Council does not exempt body-worn camera videos from FOIA, who would be able to see them?

A: Under current law, police records that are open to the public, such as an initial police report (often called a PD 251), are available to any member of the public through the FOIA process, subject to certain exemptions if the public release would have an impact on a criminal case. “Members of the public” includes anyone—from the press, to a neighbor, an interested bystander, an ex-partner, or anyone. But the PD251 is a brief paper document that contains a limited amount of information. In contrast, the BWC videos are designed to capture almost everything that an officer sees or hears. Therefore videos will capture a much broader range of information, from the faces and vehicles involved in a scene, to those just passing by; documents, phones calls, and phone numbers; as well as transmissions on police radios about other incidents and calls. This is why it is so important that the information be private.

Q: Will the media have access to the videos if there is a FOIA exemption?

A: Media would not be able to request videos from MPD. However, as with other police records, if an involved party wishes to share a video with the press, he or she will be able to. Consequently, the videos available to involved parties will be redacted as necessary to protect the privacy of others involved in the video.

Q: Are there alternatives to an exemption to FOIA that would still protect privacy?

A: We have been exploring this issue, but so far, all options either only give the appearance of transparency or will take a staggering amount of government resources to implement. For instance, Seattle’s pilot program, which has deployed BWC’s to roughly a dozen officers in one precinct, has been highlighted as a possible model. Seattle has posted some videos to YouTube, but the video is deliberately blurred and all sound is omitted. They have also engaged the city’s software development community to try to find an automated solution. The software they are testing will do some redactions, but at the rate of 4.25 hours of processing per minute of video. In order to redact just the 5,000 hours of video that MPD recorded during the limited pilot, that software would take almost 1.3 million hours—or almost 150 years—to redact the videos. Plus, MPD would still need to review the videos for quality assurance.

Some groups have argued that if the government cannot afford to redact the videos, then the cameras should not be used at all. We strongly disagree. Police accountability can be improved at many levels without the general public watching the videos. The goal of the program is not to satisfy the curiosity of everyone who might want to watch police interactions. The goal is to ensure that those who need to see the videos—the involved parties, the criminal and civil justice system, and the many organizations who work together to hold police accountable while respecting the privacy interest of involved parties— will be able to use it.

Q: Will all police interactions be recorded?

A: Our policy is that officers outfitted with a camera will turn it on when an interaction with a member of the public is initiated – such the arrival on the scene of a call for service or a crime, a citizen contact or stop, or any high risk incident, such as active shooter situations. The camera will remain on throughout the interaction. The officer will notify the member of the public that the interaction is being recorded.

Q: What if someone does not want to be recorded?

A: To ensure that there is a clear and consistent policy with which officers will need to comply, almost all interactions will be recorded. If individuals believe that their privacy will be respected, we believe they will recognize that they are being recorded for their own protection.

Q: How will the public know who has a right to access the videos and other program guidelines?

A: In the early 2000s, when MPD first deployed Closed Circuit Television (CCTV) in the District, residents had many questions and some concerns, which led to significant debate. But after a few years, most of our neighborhoods were no longer concerned and instead wanted more CCTV cameras. As with the CCTV program, we want the public to understand the benefits of BWCs and to feel comfortable working with police wearing them. That is why the policy for the pilot program, like most MPD policies, is available on our website (http://mpdc.dc.gov/bwc) and has been widely discussed in the community. This summer, the Department will also issue proposed rulemaking guiding the use of BWC. Rulemaking follows an established legal process that allows additional time for public input. And just as with CCTV, the result will be a policy for body-worn cameras that is public and can be accessed by everyone.

* Open criminal cases may be handled in conjunction with the prosecutor to ensure compliance with due process protections.

** Such as the public, the Mayor, or the Chair of the Council Committee on the Judiciary.

*** Consistent with current practices, outside sources may be used for various matters, such as helping improve data collection or training, or to research specific matters. The level of access is determined for each instance, with the partner signing confidentiality agreements as appropriate to protect individual privacy interests.”