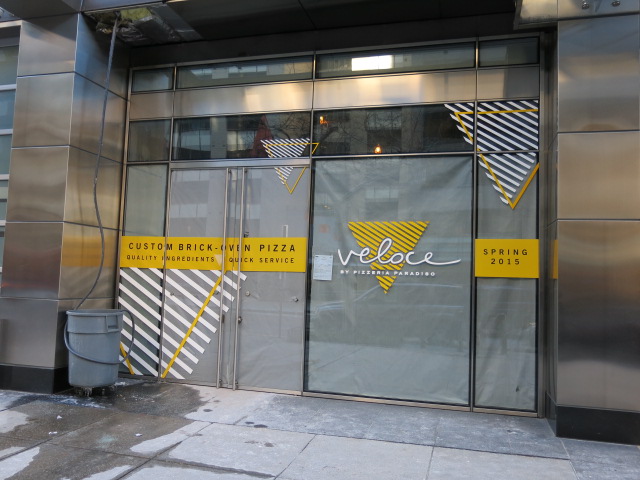 “This spring, Washingtonians can anticipate the opening of Veloce, a quick service pizza restaurant from the acclaimed culinary talent behind Pizzeria Paradiso. A custom designed Neapolitan-style brick oven will allow for fast cooking without compromising quality, producing artisanal pizza ready within a few minutes. Owned and operated by Chef Ruth Gresser, who is credited with bringing Neapolitan pizza to Washington more than 20 years ago, Veloce will be located in Downtown Washington at 1828 L Street, NW, serving both breakfast and lunch. The space will be designed by Eric Gronning, AIA of Gronning Architects with graphics by Soung Wiser of The General Design Co.

At Veloce, Gresser and team will serve personal sized veggie and meat pizzas, calzones, sandwiches and salads. The menu will feature composed breakfast and lunch pizzas, like the Rooster, which features basil pesto sauce, goat cheese, house-made chicken sausage, sweet red pepper and pine nuts. Patrons can also build their own pizzas and will have the option of four different crusts including white, whole wheat, mixed grains and seeds or gluten-free. Sauces will all be made in-house using organic and local ingredients whenever possible. Sausages will be made in-house, while a wide variety of cheese, protein and vegetable toppings will be available and sourced from small, quality producers.

Gresser worked with Beltsville, Md.-based Marra Forni, a local company owned and operated by an Italian family of oven makers whose expertise lies in building Neapolitan style pizza ovens. The gas brick oven was custom-built according to Gresser’s specifications and was designed to mimic the wood-burning ovens used at Pizzeria Paradiso. Weighing in at over 6,000 pounds, the oven fits up to 25 pizzas, allowing them to be quickly and expertly cooked to perfection.

Considered the matriarch of artisanal pizza in Washington, Gresser has been instrumental in the opening of three successful locations of Pizzeria Paradiso. In February 2014, she released her first cookbook, “Kitchen Workshop-Pizza: Hands-on Cooking Lessons for Making Amazing Pizza at Home.” Gresser will bring many years of expertise to Veloce, which will also focus on using recyclable and eco-friendly packaging considering its quick service nature.”