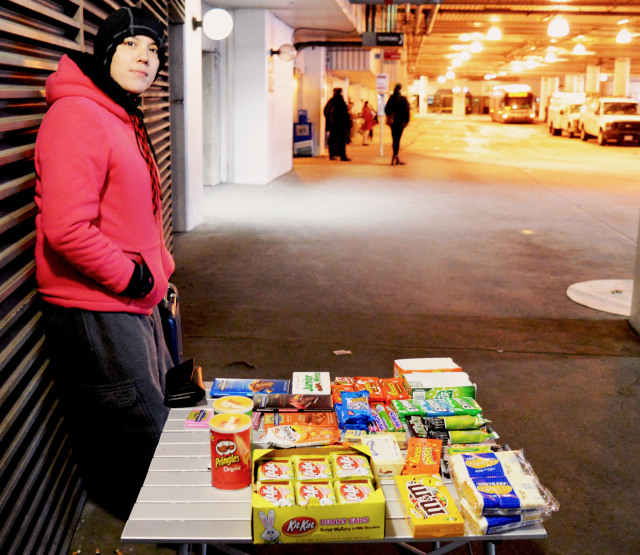 I live with my two kids and my fiancé. I have a seven-month-old and a two-year-old. He stays with them all day. The whole reason we’re in this situation is because he got laid off and has disabilities, so he’s been having issues finding a job. He was a restaurant manager in Silver Spring and the restaurant just went down. He’s in the midst of filing for disability, but obviously it’s kind of hard for him to find a job with that going on.

We’ve been in and out of different hotels – now we’ve been at the same one for about three months. We’ve been bouncing around for over a year and a half. Hotels are expensive – but we weren’t smart and we ruined our credit when we were younger, so finding an apartment is very difficult. The amount I pay in a hotel probably equals what I’d pay in rent but I would never get approved anywhere. And then whoever is renting rooms on Craigslist never wants kids, a lot of people don’t want couples… there’s always something.

If I had just saved, if it hadn’t screwed my credit up – things you don’t think about when your twenty-one or twenty-two years old – I’d be in a very different situation.

Apparently I am known as the ‘candy lady’. I’ve had so many people come by and say, ‘Good morning candy lady!’ It’s fine with me. It could be worse.

My favorite thing about doing this is getting to know people. I have met so many people that have helped me. Not even just with money, but even the most random things. My fiancé had this really infected tooth for months and we were trying to find someone to pull it. We have state insurance but it doesn’t cover dental, so everyone wanted to charge him a fee to pull this tooth. But this one lady signed him up for something and we got a phone call saying in a week and a half we could go to this church and they’d pull this tooth. Or I have a lady that used to drop off baby clothes. Cute stuff like that, so I’ve gotten to know people. I like that.

I went to University of Maryland for the full four years. I wanted to become a pharmacist… and then I had children. So that really didn’t pan out very well. I’m twenty-six, but most people think I’m older.”