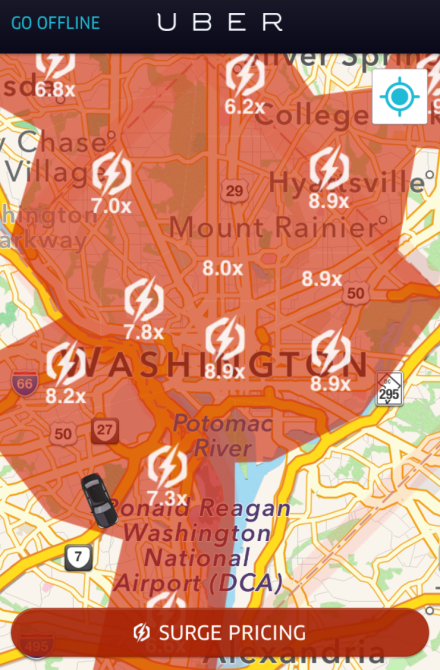 Disclaimer from OP: The writer has a full-time job and drives UberX part-time on the side. All UberX drivers are independent contractors. As he has no affiliation with the Uber corporation, any impression of positive press for Uber is incidental.

Recently, the community has expressed well-deserved interest in Uber surge pricing. There are a lot of silly rumors floating about, so I would like to share my perspective as a driver and help shed light on how the system works. Hopefully, everyone would benefit from this knowledge.

1. There is no such thing as driver collaboration.

Drivers do not know each other, nor do we know each others’ whereabouts. There are thousands of drivers and nobody thinks about causing surge pricing because that is nearly impossible for one person. A good analogy is voter turnout. One vote doesn’t matter much, but if turnout drops because voters are apathetic, then history can change. If business is slow, Uber drivers log out rather than waste their time twiddling their thumbs in a car, and if enough drivers get bored and log out, then the supply may become low enough that surge pricing occurs during the next demand spike.

2. Pricing is determined via territories.

Attached is a screenshot from the app at 2AM on New Year’s Eve. The territories are quite large and pricing is calculated based on aggregate demand and supply across the territory. For instance, Foggy Bottom and Shaw are in the same territory, and East Potomac Park and H Street NE are in the same territory. It is perfectly possible for surge pricing to exist while your block has abundant drivers – for instance, a huge demand spike at Nats Park would surge the territory while you sit at home in Trinidad wondering why Uber is trying to rip you off.

Except in extraordinary circumstances (such as snow emergencies, where the price is limited to 2.9x), surge pricing is determined fluidly and automatically by supply and demand. There is no Bond villain sitting at a terminal pushing buttons to rip people off. My best guess is that recent increases in surge pricing result from lower base fares combined with increased popularity. Bad weather and congestion (due to rush hour or special events) both cause surge pricing, the former due to increased demand and the latter due to diminished supply from drivers being tied up in traffic. FWIW, on New Year’s Eve many people were able to obtain surge-free rides because the system administrators manually eliminated surge pricing several times through the night. There were not enough drivers to meet demand, so this could only be done in short spurts.

In short, the Uber pricing model is quite simple in how it works. There are legitimate complaints against either the company or individual drivers, but I can assure you that the vast majority of hearsay about pricing is demonstrably false.”