Get our email!
Search
Capitol Hill, quality of life 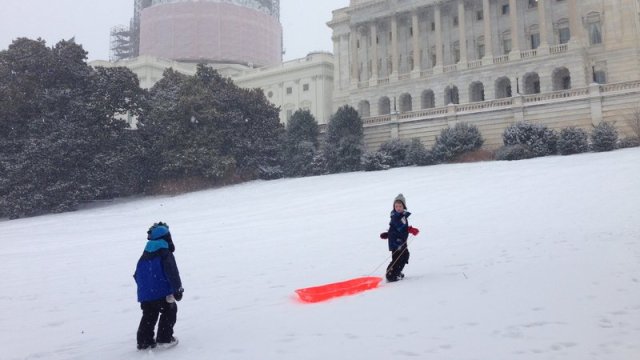 Photo via ‘Lift the sled ban on Capitol Hill’

“The forecast calls for a sled-worthy snowstorm to hit Washington, D.C. in the next 24 hours, likely the last opportunity for the children of D.C. to partake in a favorite childhood pastime, sledding, this winter. In recent weeks, those attempting to sled on the Capitol grounds have been brusquely asked to leave the premise.

Please lift the sled ban and allow the children of D.C. (including those who are children at heart) to take advantage of the last bit of snow this winter.”

“Congresswoman Eleanor Holmes Norton (D-DC) today wrote U.S. Capitol Police Board Chair Frank Larkin requesting a waiver of the sledding ban on Capitol Grounds effective from March 5-8 in anticipation of a snowstorm expected to drop a significant amount of snow in the District of Columbia. Members of Congress and the public can request a waiver of any of the Capitol Police Board Regulations. Last month, Norton wrote Larkin urging the U.S. Capitol Police Board to overturn of the prohibition on sledding on the Capitol Grounds. The Board has until March 26, 2015, to provide Norton with a formal response to her letter.

“This could be the last snowstorm the D.C. area gets this winter, and may be one of the best for sledding in years,” Norton said. “Children and their parents should able to enjoy sledding on one of the best hills in the city. This is a one-time waiver that will allow D.C. kids to sled while we await a more formal review of the ban, which will likely come after the last snow has fallen in our region. Have a heart, Mr. Larkin, a kid’s heart that is.”

Below is a copy of Norton’s letter:

As you are aware, I wrote you last week requesting that the Capitol Police Board remove the ban on sledding on U.S. Capitol Grounds from Capitol Police Board Regulations. However, the District of Columbia is expected to receive seven to eight inches of snow tomorrow, the largest snowfall this winter. Families have started calling my office because they do not want to be turned away once again from sledding on U.S. Capitol Grounds. Therefore, I am requesting a waiver of the sledding ban effective from Thursday, March 5, 2015, through Sunday, March 8, 2015, so that children, parents, residents and visitors to the nation’s capital can sled on U.S. Capitol Grounds, one of the best hills in D.C. for sledding. Pending further review by the Capitol Police Board of my recent letter, we seek this immediate waiver in light of the upcoming snow.