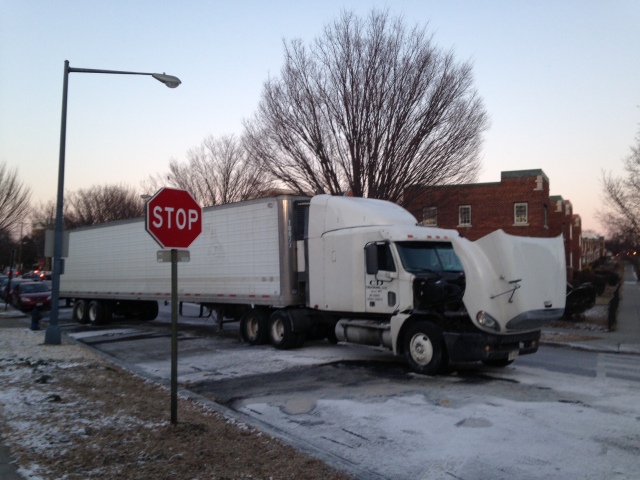 This truck and trailer have been blocking the SW bound lane of the 3900 block of Kansas Ave NW since the early, early morning hours of Saturday 2/14. It initially had a patrol car stationed behind it until midday Saturday, but as of Sunday night, it has a ticket on it and calls into 311 & 911 have simply been met with responses of no idea what to do and that the district doesn’t have the equipment to tow a tractor trailer. Since traffic has to move into the oncoming NE bound lanes to get around the truck and visibility to the east bound traffic on Randolph is almost completely blocked, this is a traffic accident waiting to happen. How does one get the truck moved?”

Ed. Note: MPD is aware of the situation and is conferring with the Department of Public Works. MPD does not have a crane that can tow a tractor trailer.

UPDATE: After MPD alerted DPW and the Mayor’s Office – the truck has been removed.