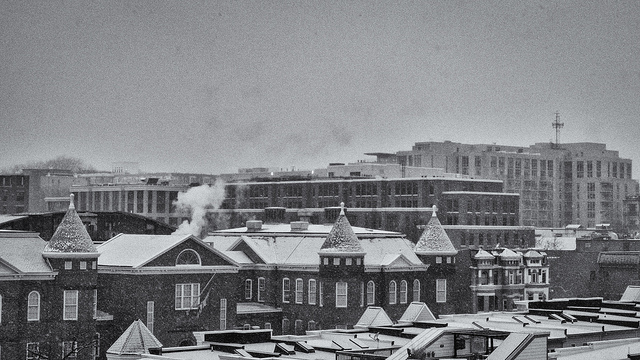 “Snow emergency taxi fares in effect from 7 AM to 7 PM Tues. Taxis can add a fee of $15 to the metered charge. http://dctaxi.dc.gov”

“Due to forecast weather and expected road conditions, Metro is advising riders of the following service changes for Tuesday, February 17:

All late-night bus service will be cancelled tonight. The last buses of the night will meet the last Metrorail trains at outlying stations; however, after 1 a.m., no bus service will operate until approximately 5 a.m.

Based on the curent forecast, Metro expects to begin Tuesday on a SEVERE SNOW PLAN, if conditions allow. Under the severe snow plan, buses operate on major roadways only. Visit wmata.com for details. Service may be further reduced if it is unsafe to operate.

Metrorail will make every effort to continue operating train service, both above and below ground. However, due to expected weather conditions and lighter-than-normal ridership, all Metrorail service will operate on a Saturday schedule on Tuesday, February 17. This allows additional time between trains for snow-clearing operations and also protects railcars from severe weather conditions, thereby allowing for more reliable service after the storm passes when more people are riding.

All MetroAccess service (paratransit service for customers with disabilities) is suspended until further notice. Riders are encouraged to sign up for MetroAlerts to be notified when service is restored.”

More Stories
Last Thing in the World You Want at a Grocery Store Before a Snow Emergency – Burst Water PipeThere it is – Feds Closed; DC Public Schools Closed