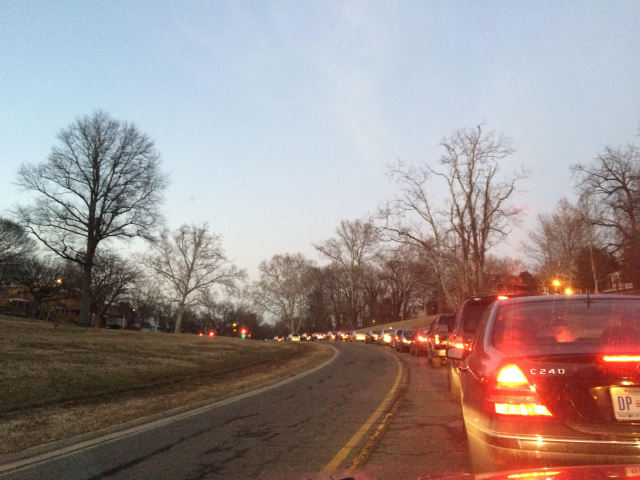 A few weeks ago the city finally responded to public concerns about the unclear lane markings and unsafe pedestrian crossings along Arkansas between 16th St. and Georgia Ave. by painting tons of parking boxes along every empty curb. This has helped organize traffic and slow the pace of Maryland drivers racing up Arkansas through a residential neighborhood, past a busy dog park, to get to Georgia Ave, but the way it was done seems very sloppy and in some places it seems to have created more problems.

First, on either side of 14th St., while going north on Arkansas, there are parking boxes VERY close to the intersections, yet cars that are not turning left are expected to get to the right to continue straight. This leads many drivers to drive in the parking box, and is just asking for a side-swipe or other collision.

Second, this new congestion has led to a serious backup down Piney Branch that didn’t exist before these parking boxes were added. At this point I don’t know if this is the responsibility of DDOT, the Park Service, MPD, Mayor Bowser, or someone else. It seems to have created more problems than it solved and adds time to everyone’s commute. Councilwoman Bonds’ needling of DDOT seemed to get some action on this issue a few months ago. Any chance the Ward 4 candidates would bother to pay attention to something like this?

Any ideas on how to get smart traffic engineering instead of just tons of random parking boxes?

I think they need to take out the parking spots closest to the intersection with 14th St. The one lane of traffic coming up Arkansas gets stopped up by cars turning left to go up 14th, and cars that want to continue north on Arkansas end up stuck because the area to get around the turning cars is very small, in part because of the parking box close to the intersection. It just seems like someone told DDOT to go out and put in parking lanes to calm traffic (as people have been calling for) but they didn’t think it through. “