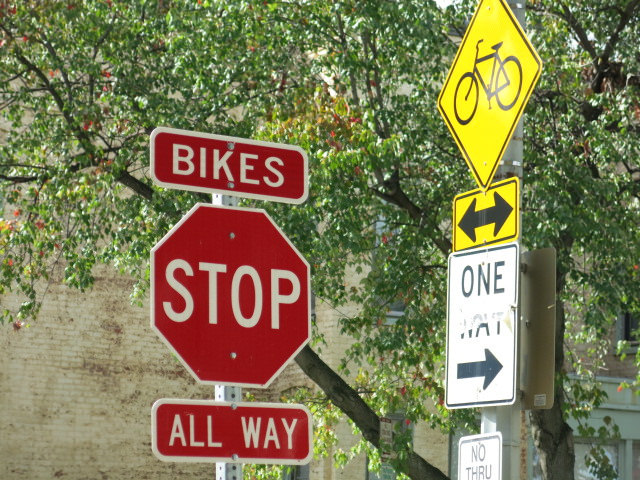 My dog, a black lab named Charlie, and I were crossing Adams Mill Rd from Walter Pierce Park to Ontario Pl; Charlie was about 3 feet in front of me on a red leash. The cyclist was northbound, riding towards Harvard from Calvert. If he looked at all when approaching the intersection, which I doubt he did, he might not have seen Charlie in the darkness. Given his speed and where we were in the crosswalk when he ran the stop sign, he would have either hit my dog or been tripped up by the leash. He swerved to the right at the last minute, jumped the curb, and went into a iron fence around the building on the corner before falling off his bike. Then he jumped off, got up, and came straight towards us. He didn’t even check his bike, he just started yelling. “This is your fault, you’ll have to pay for the damage, I should have just hit your dog, it would have been a softer landing…” stuff like that. I was totally shocked so I didn’t say anything for the first minute and then I pointed out that we were already in the crosswalk when he appeared and he should have stopped at the stop sign. When he started demanding my contact and insurance information, I just walked away. When I looked back, he was disappearing around the corner down Adams Mill, walking his bike.”

Read more →
More Stories
Friday Question of the Day – What is the Proper Etiquette for sitting at the shared tables in Union Market?Random Reader Rant and/or Revel