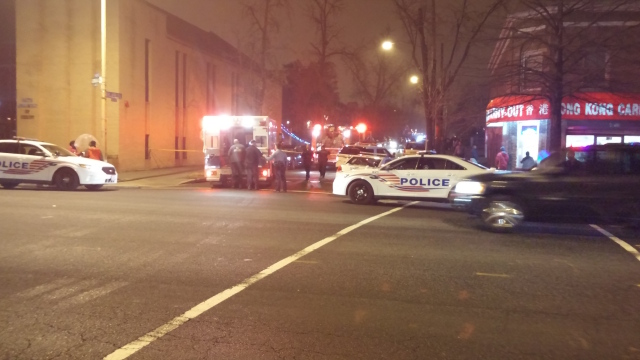 A reader sends the photo above and writes:

“Around 6:05 pm tonight I heard 6-10 shots ring out down the street. Turns out someone got shot near the Chinese restaurant on the corner of Georgia Avenue and Delafield Place in upper Petworth.”

“On 12/23/14 around 6:00 PM police responded to a call for the sounds of gunshots. The victim was located suffering from gunshot wounds. Emergency medical personnel attempted to resuscitate the victim but he succumbed to his injuries Homicide detectives are investigating the case.”

“Detectives from the Metropolitan Police Department’s Homicide Branch are investigating a homicide which occurred in the 900 block of Delafield Place, Northwest.

On Tuesday, December 23, 2014, at approximately 6:07 pm, officers from the Fourth District responded to a call for a shooting in the 900 block of Delafield Place, NW. Upon arrival, they located an adult male unconscious, suffering from multiple gunshot wounds. DC Fire and Emergency Medical Services personnel responded and determined there were no signs of life. The decedent was transported to the Office of the Chief Medical Examiner for the District of Columbia where an autopsy will be performed to determine the cause and manner of death.

The decedent has been identified as 21-year-old Daniel Joseph Hinton, of Northwest, Washington, DC.