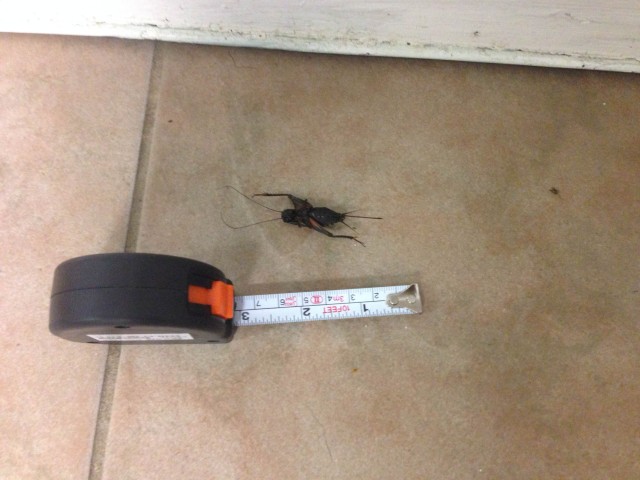 I just recently moved into a basement apartment. I moved in slowly while exiting my previous apartment and noticed what I thought at the time were grasshoppers. Turns out they are the Asian Camel Crickets that are invading the Northeast. They were pretty large and there were about 3 that I can remember in different parts of the one bedroom apartment. I notified my landlord and she said its a seasonal thing and they are all over the neighborhood and offered to get home defense spray for the interior perimeter of the the basement. I said I would try it and see how it goes. I also contacted a pest control company that did free home inspection, however, they said they would need the landlord’s permission before they came out to inspect. In the meantime, by now I have completely moved in and I decided to unpack so they had less places to hide. With every box I moved I found more and more, but the end of the week I had killed at least 20 and started documenting with my camera!

Now, I’m paranoid, afraid and walking around my apartment with my boom. When I found three under my bed I was fed up and asked my landlord to do something again. I decided to stay with a friend since I couldn’t sleep comfortably. She responded with the suggestion of getting a stronger spray. At this point, I realize this issue is more than likely not going to go away with spray and not the place for me. I asked if I could find her a new tenant to replace me, she said no, that I can’t sublease, and that she wouldn’t want to start over again.

So I started to do some research to figure out how I can get out of this sticky situation. I’ve called around and spoke to some co-workers and have come to a few conclusions.

1, She is renting the basement out illegally and doesn’t want a home inspection.
2. She will sue me if I decide to leave without completely the 12-month lease.
3. She is too lazy to start the process again and hopes I will just stop complaining until it gets cold and the crickets go away.

Either way at this point I am fed up and just want to find a new place to live….help! What are my options?”