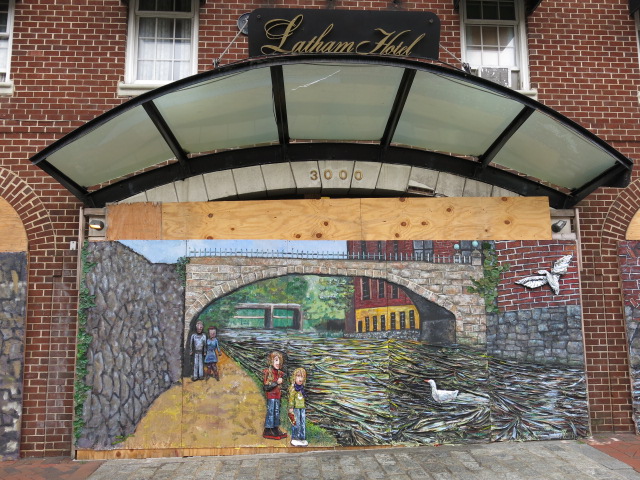 This turned out awesome (def. worth checking out in person.) From a press release:

“The Georgetown Gongoozlers mural project (a “gongoozler” is an idler who stares at length at activity on a canal) begins this Friday, August 1, when Nena Depaz, the first of four local artists commissioned to produce a mural, installs her mixed-media work on the construction barricades covering the main entrance of the shuttered Latham Hotel, located at 3000 M Street, NW. Depaz’s work includes found materials from the canal’s towpath.

“I have lived close to the C&O Canal my whole life. It holds some of my very best memories,” said Depaz. “When I was a child, my father would walk my sister and me along its paths, and tell us stories about its history. Many years later, the most romantic dates I ever went on with my husband ended with stroll along the canal. Today, I still find it to be a beautiful and magical place. I hope that I am successfully able to convey my love for the canal through this project.”

The Georgetown Gongoozlers mural project celebrates the history and natural beauty of the C&O Canal. The murals will be exhibited sequentially on the façade between August and January (Nena Depaz, August 1-September 4; Georgetown resident Sidney Lawrence, September 5-October 15; Kelly Towles, October 16-November 13; Ekaterina Krupko, November 14-January 5). Each installation will later be auctioned to support historical interpretation efforts on the C&O Canal, including the construction of a new canal boat.

The Latham Hotel building closed in 2012 in order to make capital improvements. The Georgetown BID commissioned the temporary, rotating artworks to improve the streetscape during construction, discourage illegal graffiti, and to help support community efforts to maintain and interpret the section of the C&O Canal that is adjacent to the Hotel.” 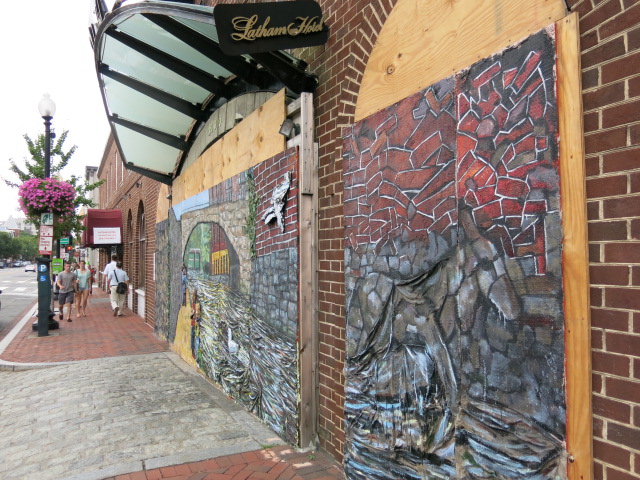