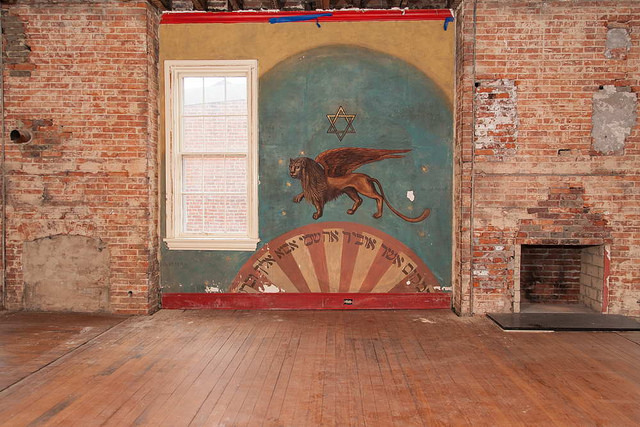 From the Jewish Historical Society of Greater Washington:

“You may have heard about the synagogue mural recently rediscovered behind an apartment wall in Vermont, but you may not know that hidden on the second floor of 415 M Street, NW, right here in Washington, is a fragment of the only known synagogue mural in the area. It was painted almost 90 years ago, and, until the 1990s, preserved under layers of paint and wallpaper. The building is going to be converted to condos this summer, and the Jewish Historical Society of Greater Washington has started a campaign to cultivate awareness about the mural, and raise funds to rescue the original elements of it.

The mural is the remaining portion of a larger piece that once surrounded the synagogue’s ark. In 1993, as if peeling back layers of time, the then-owner rediscovered the mural hidden beneath layers of old paint and wallpaper. With help from an artist and guidance from the Jewish Historical Society, she worked to restore the celestial scene, Jewish star, and a portion of the biblical quote that encircled the ark – and added a winged lion. In 2013, BlackRock Holdings, a custom-home building company based in McLean, VA, purchased the building and will convert the property into a multi-family condominium later this summer.

JHSGW and BlackRock Holdings hope to save this unique piece of Washington, DC Jewish history before construction starts in July. We have a proposal in hand from a conservation firm to remove and conserve the mural. But we need to act quickly to raise at least $20,000 to remove and preserve the mural. Your donation will make it possible for the Jewish Society of Greater Washington to preserve this remnant of our past for generations to come.”