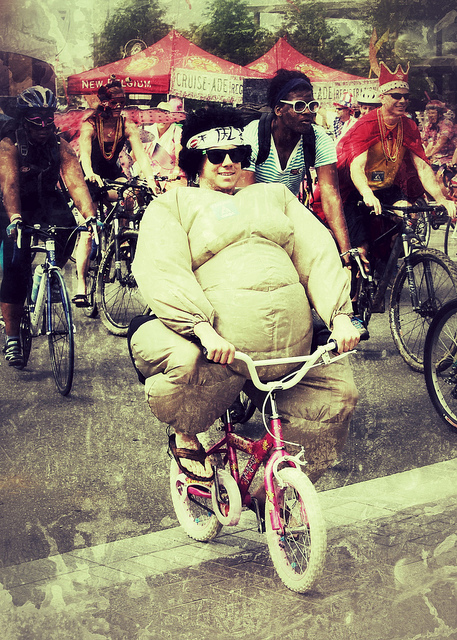 “Tour de Fat season is back; New Belgium Brewing today announced that the highly anticipated 2014 national tour of traveling bicycle advocacy will go to ten cities from May to October. This year marks the 15th season for Tour de Fat, which will travel across the U.S. These day-long festivities are free in every city, but the proceeds from beer sales go to local non-profits. Since its inception, Tour de Fat has raised more than $3 million, and raised half-a-million dollars last year alone.

The events kick off with a costumed bicycle parade that winds through city streets, ending in a city park. That’s when eclectic entertainment takes over from musical acts to yo-yo performers, bike contests and even vaudeville acts. This year will also include some brewing education and feature a “Bicycle Revival” to inspire festival-goers to believe in the power of two-wheeled transportation.

During each tour stop, New Belgium tries to leave as little of an environmental imprint as possible. Tour de Fat hosts green vendors, has compost and recycle stations and festival trucks that operate on biofuel sourced from recycled waste oils.

In 2013, Tour de Fat traveled to 12 cities nationwide and attracted 97,500 festival attendees and 57,359 bicycle parade participants. The philanthropic events raised a total of $536,000 for local nonprofits and diverted an impressive 85 percent of waste from landfills. Tempe, Ariz., raised the most money (over $90,000) and New Belgium’s hometown of Fort Collins, Colo. attracted the most parade riders and festival-goers, both totaling 25,000 people.

See www.facebook.com/TourDeFat for the Tour de Fat credo, schedules, videos and to submit an entry to swap your gas-guzzler for a fancy new bicycle in 2014.

Tour de Fat 2014 will cycle through each of the following cities: