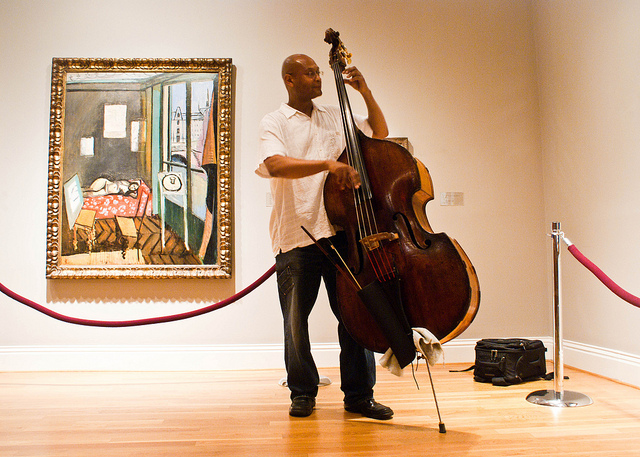 The series, which coincides with the 60th anniversary of the famed Newport Jazz Festival presented by Natixis Global Asset Management, kicks off at 7 p.m. on April 24 at the National Archives with “Jazz Diplomacy: Sending America’s Music to the World,”a panel discussion on how the U.S. Government used jazz as a diplomatic tool during the Cold War.

The programs will be held in the William G. McGowan Theater of the National Archives Building in Washington, DC. Attendees should use the Special Events entrance on Constitution Avenue at 7th Street, NW.

John Edward Hasse—author, curator, biographer of Duke Ellington, and founder of the Smithsonian Jazz Masterworks Orchestra—leads a discussion on efforts by the United States Information Agency, the Voice of America, and the U.S. Department of State to use jazz as a diplomatic tool during the Cold War. The program will incorporate photographs, motion picture excerpts, and sound recordings from the National Archives. Panelists include Ambassador David Killion, former U.S. Permanent Representative to UNESCO; David Ensor, Director of Voice of America; and Dr. Penny M. Von Eschen, author of Satchmo Blows Up the World: Jazz Ambassadors Play the Cold War.

Film: A Great Day in Harlem

This 1994 documentary (60 minutes) highlights a remarkable moment in the history of American music when dozens of America’s jazz legends unexpectedly gathered for a photograph that would become emblematic of the Golden Age of Jazz.

Jazz is born in New Orleans during the 1890s, at the height of the Jim Crow era. It is the creation of the African American community but incorporates every kind of music heard in the streets of the country’s most cosmopolitan city. (90 minutes.)

During the uproarious “Jazz Age” of the 1920s, the story of jazz becomes the story of two great cities, Chicago and New York, and of two extraordinary artists, Louis Armstrong and Duke Ellington. (120 minutes.)

As the stock market soars to record heights, jazz is played in dance halls and speakeasies everywhere. For the first time, improvising soloists and singers take center stage. (120 minutes.)

Film: From the Vaults: Jazz Diplomacy

Today we present a selection of short films from the holdings of the National Archives related to the U.S. Government’s use of jazz as a diplomatic tool during the Cold War era. (60 minutes.)

Family Day: Jazz Family Day and Performance by the Jazz Academy of Music

Get ready to get in the groove with the Jazz Academy of Music! Bring your family to enjoy an afternoon of jazz including a performance by an ensemble from the academy. Learn what jazz has to do with the National Archives, meet the youth musicians, visit an instrument petting zoo, and try other hands-on activities. The noon performance in the McGowan Theater is followed by activities in the Learning Center.

With America mired in the Great Depression and the economy in tatters, jazz is called upon to lift the spirits of a frightened country. (120 minutes.)

Film: Jazz on a Summer’s Day

Discussion: Jazz in the USA: On the 60th Anniversary of the Newport Jazz Festival

Celebrate jazz as an American art form in the context of the 60th anniversary of the Newport Jazz Festival. Journalist Soledad O’Brien, a member of the Foundation for the National Archives Board of Directors, moderates a panel discussion with George Wein, founder of the Newport Jazz Festival, Dan Morgenstern, author, archivist, Grammy Award-winner, and NEA Jazz Master; and celebrated jazz musicians Jonathan Batiste and Christian McBride. Film clips of the 1960 festival from the holdings of the National Archives will accompany the discussion.

In the mid-1930s, jazz has a new name—swing—and for the first time musicians become matinee idols. (90 minutes.)

In the late 1930s, commerce sometimes leads to compromise, and the heart of jazz is often kept under wraps. But in the middle of the country a new kind of music is incubating. (105 minutes.)

During WWII, Swing becomes a symbol of democracy at home and bandleaders enlist and take their music to the armed forces overseas. The new style called “bebop” begins to spread, altering the course of jazz forever. (120 minutes.)

In the postwar years, the nation’s musical tastes are changing, as young people turn to sentimental singers and rhythm and blues. A devastating narcotics plague sweeps through the jazz community. (120 minutes.)

Post-war prosperity continues but beneath its placid surface there is a growing demand for civil rights. Duke Ellington experiences a rebirth after a triumphant appearance at the 1956 Newport Jazz Festival. (120 minutes.)

In the 1960s, Miles Davis joins forces with rock musicians and creates Jazz Fusion. As it enters its second century, jazz is still alive, still changing, and still swinging. (120 minutes.)”